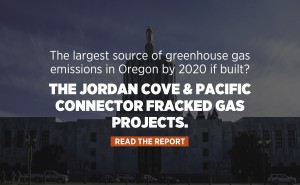 But on every point they targeted we used peer-reviewed science, whereas they appear to rely on outdated assumptions and baseless conjecture.

The group, which calls itself “Boost Southern Oregon” published its views in a number of Oregon outlets. Here’s a blow-by-blow analysis of their critique.

“the opposition to Jordan Cove paid for their own assessment that reaches a predetermined conclusion.”

This is entirely false and is an assumption made by the authors with zero evidence to support it. Oil Change International is a 501(c)3 organization that is funded by foundation grants and individual donors. We have a funded program to carry out analysis of GHG emissions from proposed oil and gas infrastructure. We do not contract work or do any kind of fee-based work. No money has changed hands between groups opposing Jordan Cove and Oil Change International. The GHG emissions briefing for Jordan Cove was one in a series of similar briefings we have done on natural gas infrastructure and Jordan Cove was chosen for this series because it is a key gas project that is still going through the permitting system.

For emissions data specific to the project, we used the project permit application, which details the expected emissions from fuel burning equipment at the project sites. We used this data for the relevant stages of the project’s emissions lifecycle (pipeline transport and the LNG plant).

For other stages in the lifecycle, we did in fact use independent data. We selected the most recent available data that was relevant to the project’s gas supply (see below). We are fully transparent about our sources and calculations. We detailed our methodology in an appendix to the briefing and published a spreadsheet with our calculations with references and links to all sources.

“The Obama Administration already conducted extensive research into the natural gas supply chain and found that methane leaks are drastically lower than what these activists are selling.”

The authors are presumably referring to methane leakage rates derived from the EPA GHG emissions inventory during the Obama Administration. We did in fact use this data for those stages in the emissions lifecycle where more up-to-date and project-specific data was not available. These estimates only provide a national average however, and therefore we chose to use a peer-reviewed study, published in June 2017, that measured methane leakage in the specific areas where the gas potentially supplying the project would be produced, the Rocky Mountain states of Colorado, Wyoming, and Utah. We did this to improve the accuracy of our estimate. This is clearly discussed in the methodology appendix.

We also highlight in the report that several peer-reviewed studies have found the EPA estimates to be low. We clearly cite and reference two of the most recent of these, but there are in fact many more. For this reason, we stated in the briefing that because we used EPA national average estimates where we did not have more project-specific data, the overall methane leakage estimate is likely conservative. Indeed, a lifecycle rate of 1.77%, which was used in our reference case, is quite low compared to several studies that have for example estimated average leakage rates in the U.S. at 3.8%,  and some as high as 7%.

Further, as the numerous studies on methane leakage in oil and gas production basins published annually demonstrate, it is intellectually and scientifically false to propose that methane leakage rates have been established and set in stone. This is why we used the most recent peer-reviewed study available that is relevant to the production zone supplying the project. Far from cherry picking data to suit a foregone conclusion, we endeavored to use the best and most recently available data. If a study is published of methane leakage rates in the Rocky Mountain states that contradicts the one we used, we would be happy to review it, but the authors provide no such data. Rather, their challenge is based on outdated and extensively debunked government figures.

It is also worth noting that the issue of the global warming potential (GWP) of methane compared to carbon dioxide is also not fully resolved. Research published in 2017, discussed in this EDF blog, suggests that the radiative forcing of methane could be stronger than previously thought and that the IPCC may revise its figures up in its forthcoming report.

“Perhaps the greatest pet peeve we have with this report and the oppositions is their mantra that “Jordan Cove is the largest greenhouse gas emitter in Oregon.” It is completely false. A simple search within the Oregon Department of Environmental Quality (DEQ) will show you how fabricated their claims really are.”

The authors here contend that DEQ permits show other plants in the state of Oregon emit more emissions than Jordan Cove will, and our claim that if the project goes ahead it will become the largest GHG emitter in the state is “completely false”.

While we could have perhaps been clearer on the details of this comparison, the fact is that Jordan Cove will indeed be the largest emitter in the state if it goes ahead and is operated at anything like the rate the company intends it to be.

The authors point to the DEQ permits for GHG emissions for the Boardman coal plant and a number of gas fired power plants. These plants are permitted to emit more than Jordan Cove is estimated to. However, these plants are not emitting anywhere near their maximum permitted level. We used Oregon DEQ data for the most recent year of recorded emissions (2016) and found that the Boardman coal-fired power plant was by far the largest emitter in the state at slightly less than 2.4 million metric tons. This is over 35% less than the permitted 4 million tons. Other large emitters in the state, mostly gas-fired power plants, emitted 1.25 million tons in 2016 or less.

As the Boardman plant is slated to be shut in 2020, and the Jordan Cove Energy Project’s own estimates of its on site emissions (we uses figures from their latest application, which were lower than their original estimates, and include the pipeline emissions) are around 2.2 million tons per year, we correctly pointed out that the project would become the largest GHG emitter in Oregon if it begins operation after 2020, as is intended.

It is possible that Jordan Cove will not be used at the high utilization rate that the project application currently estimates, and therefore emissions may turn out to be lower. This is the case with the power plants we are comparing to. However, power plants operate in very different ways to LNG terminals and pipelines.

Jordan Cove, however, would supply a diverse global market for gas that operates very differently. In fact, a recent peer-reviewed study suggested that U.S. LNG may stimulate increased energy demand and gas use in the markets it is sold into, undermining renewable energy development in some of those markets. This could mean that Jordan Cove’s LNG plant may run at high utilization rates, at least until energy policies and market dynamics shift more in favor of renewables in the target markets.

It’s hard to predict the future direction of global energy markets, but it is clear that older fossil fuel plants in the U.S., whether coal or gas, are facing reduced utilization, while new LNG export plants are designed to run as much as market conditions will allow.

“Operation of the Jordan Cove plant could replace as many as 11 coal-fired power plants in Asia with cleaner burning gas fired plants.”

In the final section of the article, the authors make unsubstantiated claims about gas replacing coal in Asian markets, without addressing any of the referenced evidence that we discussed in the briefing. We cite a peer-reviewed study published in November 2017, as well as an ongoing legal challenge against the Federal Energy Regulatory Commission (FERC), in which outdated assumptions regarding the role of gas in displacing coal are substantively challenged.

The fact is that renewable energy is challenging both coal and gas-fired power generation on a cost-of-energy-produced basis. A peer-reviewed study published in the international journal Energy found that LNG exports from the U.S. could raise emissions in destination markets by triggering additional energy demand rather than displacing coal, and by diverting capital from renewable energy development.

Gas has played a role in displacing coal in the past, but that dynamic is itself being replaced by a surge in clean energy technology that will only grow stronger and more economically efficient. It can no longer be assumed that new gas supply displaces coal and leads to lower emissions, even with low methane leakage assumptions. Just last month, a U.S. utility executive told investors that by 2020, just two years from now, building a new solar plant with battery storage will be cheaper than operating an existing coal plant.

We performed this analysis in part to counter the misinformation on coal displacement that continues to be widely promoted by the gas industry. Decision makers must have the latest information on hand rather than the outdated and false talking points the gas industry has utilized for the past 20 years. A more robust and comprehensive assessment of existing data and analysis clearly indicates that LNG exports may increase GHG emissions when full lifecycle emissions and market impacts are properly accounted for.

See also these other briefings on greenhouse gas emissions of fossil gas infrastructure: