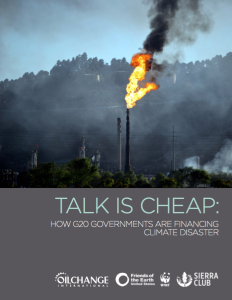 The best available science shows an urgent need to keep global temperature increases below 1.5°C to avoid severe disruptions to people and ecosystems. Recent analysis shows that burning the reserves in already operating oil and gas fields alone, even if coal mining is completely phased out, would take the world beyond 1.5°C of warming. The potential carbon emissions from all fossil fuels in the world’s already operating fields and mines would take us well beyond 2°C.

Despite this reality, the same governments that have signed on to the Paris Agreement on climate change – which agrees to hold global warming to well below 2°C and to strive to limit warming to 1.5°C – continue to provide sweetheart loans, guarantees, and other forms of preferential financing to fossil fuel projects that could cause the world to blow past those climate targets.

This analysis shows that G20 governments are providing nearly 4 times more public finance to fossil fuels than to clean energy.

With the United States indicating that it intends to pull out of the Paris Agreement, other governments must provide leadership in the clean energy transition: the remaining G20 governments will need to step up. Governments simply cannot be climate leaders while continuing to finance fossil fuels at current rates.

Governments must begin to shift trillions of dollars in investment from polluting infrastructure to low-emission, climate- resilient activities – a massive financial shift from ‘brown’ to ‘green’ – to stay within climate limits. They should start with their own public finance. Yet this analysis shows that recent trends are in the opposite direction. Public finance for fossil fuels far outstrips public finance for clean energy sources – a trend that will have to rapidly reverse in order to avoid the worst impacts of climate change.

Of all public finance for energy from G20 institutions and the multilateral development banks between 2013 and 2015:

If G20 leaders are serious about meeting climate goals, they must undertake rapid and ambitious efforts to shift public finance from ‘brown’ to ‘green’ activities. This is a significant step they can take even without the cooperation of Donald Trump.