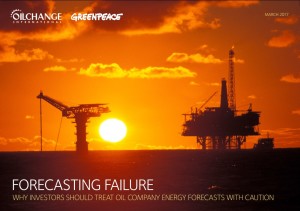 In August 2015, Shell responded to intensifying investor concern about its plans to drill in the Alaskan offshore by pointing to its forecasts of the future of energy. “Hydrocarbons are going to be needed for an awfully long time,” said Shell’s executive vice president for the Arctic. “That’s where Alaska fits into the picture”.

Shell, ExxonMobil and BP regularly publish forecasts of the energy system out to 2040 and beyond, based on analysis by the companies’ modelling teams. Not only are these forecasts used to justify high-cost, climate-busting projects, they also form the basis of how the companies talk about climate change. They downplay their own responsibility for climate change, by describing a future driven by the demand for their products, not by their own decisions.

The common features of the three companies’ forecasts are that demand for oil and gas consistently rise over the coming decades, growth of renewables is sluggish, and the world blows past the climate limits set in the Paris Agreement.

How seriously should we take these forecasts? Oil Change International and Greenpeace have together published a new report to examine how and why the companies reach these conclusions. It finds that they have repeatedly got it wrong in the past:

So why do the companies publish forecasts based on such implausible assumptions?

The assertion that fossil fuels will necessarily dominate our energy mix for decades to come risks creating a fatalism among policymakers and investors that the climate problem cannot or will not be solved, providing an excuse for inaction, and undermining confidence in alternatives. Perhaps that is their real purpose: the first initiative to publish forecasts was driven by ExxonMobil’s PR department, aiming to shape debates on energy among “informed in?uentials”, including investors and policymakers. And as BP CEO Bob Dudley put it in 2015, “The challenge ahead is to make the case for the necessary role of fossil fuels”.

The oil companies go to great efforts to portray their forecasts as works of objective analysis of the future. They are not – they are self-serving descriptions of the futures the companies would like policymakers and investors to believe in. Smart decision-makers should see through them.