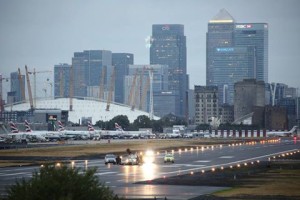 Activists from Black Lives Matter UK have shut down London’s City airport this morning in a protest about environmental racism and climate change and to protest against the UK’s environmental impact on black people.

As I write, activists are occupying the runway, leading to large scale disruption and cancellation or diversion of flights from London’s smallest airport, which is the closest to the heart of the city.

According to the Metropolitan Police, nine protesters erected a tripod on the runway and were locked together. Beside them banners read: “Black Lives Matter” and “Climate Crisis is a Racist Crisis”. 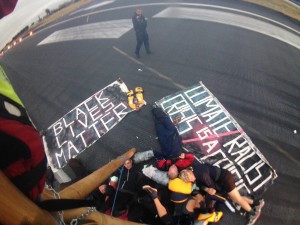 There is currently a stand-off between the Police and protestors, who used a boat to sail across the local dock to access the runway.

A series of tweets from Black Lives Matter UK (BLMUK) this morning gives further reasoning for the protest: “Climate crisis is a racist crisis. 7/10 of the countries most affected by climate change are in sub-Saharan Africa.”

Another read: “The UK is the biggest per-capita contributor to temperature change & among the least vulnerable to its affects.”

In a statement, BLMUK argued that another reason for the protest was the disparity between locals living near the airport and the well paid city employees using the airport.

“This morning activists in support of Black Lives Matter UK shutdown London City Airport in the London Borough of Newham. This action was taken in order to highlight the UK’s environmental impact on the lives of black people locally and globally”

The statement continued: “The average salary of a London City airport user is €136,000 … It is an airport designed for the wealthy. At the same time, 40% of Newham’s population struggle to survive on £20,000 or less.”

It added: “By 2020 there will be 200 million climate refugees globally. Whilst at London City airport a small elite is able to fly, in 2016 alone 3,176 migrants are known to have died or gone missing in the Mediterranean, fleeing conditions that they did not create because cheaper, easier and most importantly, safer avenues have been blocked by the UK and other European countries. Black people are the first to die, not the first to fly, in this racist climate crisis.”

A video issued by BLMUK also argued that the expansion of the airport could not go ahead, as it would disproportinately affect black people. “It cannot go unchallenged”.  The video also draws parallels between treacherous journies being made by refugees risking their lives to get to Europe and the ease that the rich can fly. “If the refugees trying to reach this country safely can’t fly, then the rich won’t either,” it said.

The video ends: “Climate crisis is a racist crisis. Shut it down”.

The protest is currently causing a storm on social media, with some passengers predictably venting their frustration at having their travel plans disrupted.

Others have shown their support. One, Emily Collins wrote: “Full support and solidarity to @ukblm for their #shutdown of London City Airport. #shutitdown #blacklivesmatter.”