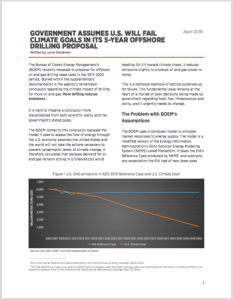 The recently released draft five-year plan for offshore oil and gas drilling is predicated on a failure to act on stated climate policy according to a new briefing note released by Oil Change International and Greenpeace USA today. To remedy this, the U.S. government should act quickly to implement a climate test in order to evaluate energy decisions on the basis of our national and international climate commitments.

The Bureau of Ocean Energy Management (BOEM)’s proposed 5 year plan uses the Energy Information Administration’s Reference Case scenario for future U.S. oil demand. This scenario, as the briefing note shows, leads to 445% higher GHG emissions in 2050 than the level the U.S. has committed to in order to prevent dangerous climate change.

While the draft plan did not open up new leasing areas in the Atlantic, it does propose continued leasing in the U.S. Arctic Ocean and the Gulf Coast – regions that are both highly ecologically sensitive, and that contain reserves that cannot be burned if the U.S. hopes to reach its climate goals.