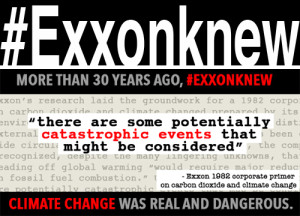 Yesterday, the Attorneys Generals from Massachusetts and the United States Virgin Islands announced that they were following California and New York in launching their own investigations into whether the oil giant mislead the public and shareholders over climate change.

Speaking at a press conference in New York, the Attorney General of Massachusetts, Maura Healey said: “Part of the problem has been one of public perception. Certain companies, certain industries, may not have told the whole story.”

In total it was announced that seventeen US Attorneys Generals are now cooperating on investigations into whether Exxon and other oil companies misled investors over climate change.

Speaking yesterday at the conference, Virgin Islands Attorney General, Clade Walker, said “If Exxon Mobil has tried to cloud their judgment, we are determined to hold the company accountable”.

Gore drew similarities between the oil industry’s response to climate change and that of Big Tobacco which denied the health risks of its products for decades, something that I and many others have written about over the years.

“I do think the analogy may hold up rather precisely,” he said.

Exxon for its part responded as only Exxon knows how to do – to keep on spinning its web of denial and disinformation.

In a blog post, she wrote: “The allegations are based on the false premise that ExxonMobil reached definitive conclusions about anthropogenic climate change before the world’s experts and before the science itself had matured, and then withheld it from the broader scientific community.”

In a defence that is laughable if it were not so ridiculous, McCarron added that “The allegations repeated today are an attempt to limit free speech and are the antithesis of scientific inquiry. Left unchallenged, they could stifle the search for solutions to the real risks from climate change.”

Words such as these coming from a company which has spent hundreds of millions and decades funding the climate denial movement, are literally beyond parody.

They also come too late for the Rockefeller Family Fund which last week announced it would be divesting from fossil fuels as quickly as possible and “eliminate holdings” of Exxon.