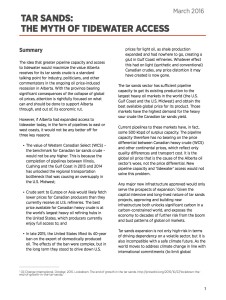 The idea that greater pipeline capacity and access to tidewater would maximize the value Alberta receives for its tar sands crude is a standard talking point for industry, politicians, and other commentators in the ongoing oil price-induced recession in Alberta.

This briefing note counters this argument with analysis that shows that even if Alberta had expanded access to tidewater today, in the form of pipelines to east or west coasts, it would not be any better off.

The briefing outlines three key reasons for this, including: pipeline capacity, Asian and European markets, and the recent lifting of the crude export ban in the U.S.

We conclude that oil-to-tidewater is no longer a sound argument to be made in favour of major new pipelines and that mid-long term economic planning in Alberta and Canada should be focused on diversification rather than an expanded dependency on the boom and bust cycle of oil.