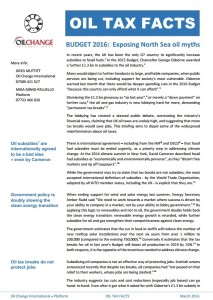 The oil industry is lobbying hard for more tax breaks, on top of the £1.3 bn given in last year’s Budget. The lobbying has created a skewed public debate, overstating the industry’s financial woes, claiming that UK oil taxes are unduly high, and suggesting that more tax breaks would save jobs.

This factsheet – produced in collaboration with our friends at Platform – aims to dispel some of the myths about oil taxes. It shows that:

You can read the factsheet here.