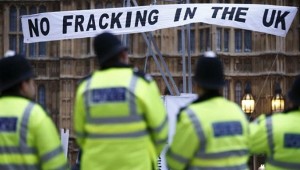 As the British Parliament winds down for the festive Christmas season, the Government has been accused of trying to “bury bad news” and hide a raft of unpopular policies, some of which have a huge impact on its commitments to climate change.

Two headlines sum up the vehemently anti-green agenda that the Conservative Government is pursuing days after Prime Minister David Cameron said in Paris that “instead of making excuses tomorrow to our children and grandchildren, we should be taking action against climate change today.”

The first on page eight of the Guardian newspaper states: “Warning of 18,000 job losses as solar subsidies cut” the second is underneath stating “fracking industry given boost with English exploration licenses.”

We need to be clear about this: the government is ideologically undermining the renewable energy industry and promoting dirty fracking, no matter the consequences for its commitments on climate change.

Earlier this week, I blogged about how the Government was now undertaking a U-turn to allow fracking in the UK’s most precious landscapes, such as National Parks.

Yesterday, the Government followed up this move by slashing the subsidies to the solar industry by 65 per cent. The Government’s own impact assessment calculates that some 18,700 jobs out of a total workforce of 32,000 could be lost due to the subsidy cut.

This will mean a massive 5.2GW less solar deployed by 2020, with nearly one million fewer installations before then.

The changes will decimate the solar industry, which will potentially lose 58 per cent of its workforce. The changes mean the market for the most cost-effective solar projects “is all but dead”, argues Damian Carrington in the Guardian.

Carrington argues that the cuts – which come when the industry was standing on the threshold of financial self-sufficiency – are “are snatching defeat from the jaws of victory” and make “a mockery of prime minister David Cameron’s speech to the Paris Climate Summit”.

As the UK slashes solar it is embarking on building the most expensive nuclear plant ever built at Hinkley Point and it remains the only G7 nation where fossil fuel subsides are rising.

To further undermine their environmental credentials, the government also yesterday announced a massive increase in the number of shale gas licenses – some 159 in all. The biggest winner was Ineos, the huge Anglo-Swiss chemicals group with 21 licenses. In all, nearly three million acres of some of the most beautiful parts of the UK could be fracked in the new round of licensing.

Chris Redston, from the Frack Free Ryedale campaign group in North Yorkshire, where many of the licenses have been granted, said: “This is a very black day for North Yorkshire, which has now been officially designated a Fracking Sacrifice Zone in the government’s relentless but misguided dash for gas.”

Emma Marrington, from the Campaign to Protect Rural England, called the decision “outrageous”. She added “With a fracking licence issued for the heart of the North York Moors, [that] national park could suffer huge environmental, visual and infrastructure intrusion on its perimeter. This, and the process in general, makes a mockery of the government’s manifesto pledge to ensure this remains ‘the most beautiful country in the world’.”