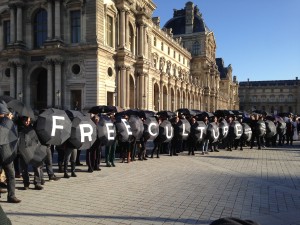 It started as just any other morning for one of Paris’ most iconic tourist attractions, the Louvre. Under a cold, clear bright blue sky the snaking queue of tourists waited patiently to get their glimpse at the world’s most famous painting, the Mona Lisa.

Away from the queues, the odd tourist armed with a selfie stick took a photo of themselves in front of the Louvre’s famous glass pyramid, with the sun just beginning to hit the top of the glass.

Behind them, tourist buses trundled half-empty on their way to the city’s top destinations.

In the distance a dozen dogs were being walked in the park, from large to small, from black to white. It could be described as a perfect Parisian December morning.

But scratch beneath the surface and tensions are running high. In a reflection of the heightened security in the city since the recent terrorist attacks, four highly armed military personnel walk past. Of the four I notice three were right handed and one was left-handed.

There are other clues too. A barrier has been erected between the Louvre and the road. By eleven o’clock, twelve Police vans have turned up. Half an hour later, heavily clad, evil-looking C2 riot police start circulating the Louvre concourse. By now a crowd is beginning slowly but surely to gather. You can tell they are not tourists.

The crowd has come to witness a performance by climate activists and artists to protest against oil sponsorship at the Louvre. It is one of the many actions to coincide with the COP21 climate talks taking part in a non-descript building on the outskirts of Paris. The activists will be calling on the Louvre to cancel sponsorship contracts with oil giants, Total and Eni.

These type of actions have been occurring in the UK for a while as activists target iconic British institutions such as the Tate to drop sponsorship by BP. Recently, dozens were tattooed with the carbon dioxide level of the year of their birth. Some have been tattooed in Paris too.

This action has been billed as the first international collaboration between creative artist /activist groups from different cultures and communities working to liberate museums and cultural institutions from ties to fossil fuel companies. The hashtag is #FossilFreeCulture. Activists from eight countries will take part.

Some fifteen minutes before the protest is due to start the crowd is building, but security is getting twitchy. One person is told they cannot take photos of the Louvre pyramid. The unthinkable is becoming normal in the new security-tight Paris.

Many long-term activists are here to show solidarity and witness the performance. Bryan Parras from Texas, who days earlier had given evidence at an impromptu trial of Exxon at the COP talks, is one. He had pointed out the heightened levels of leukaemia near their giant refinery, although I am sure Exxon would like people to believe there is no link between the two.

“Folks don’t think about oil and gas and health impacts”, he says, before criticising how oil companies use the arts, like the Louvre to greenwash their image.

Veteran American activist, John Sellers is here too. Sellers played such a pivotal role in the direct actions protests against Shell’s misguided Arctic drilling campaign in the summer. “Any institution that trades in science and fact should not be taking money off a company that peddles in misinformation and subverts science and facts,” he says.

“We have to make the oil industry social and cultural pariahs” Sellers argues. And one of the things that has to happen is to break the links between arts and oil.

By now the Police presence is getting heavier, almost menacing and there is an air of expectation building. 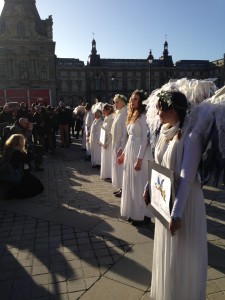 The first sign of the normal morning descending into protest is the appearance of seven “climate angels” who have “flown” from Australia to offer solidarity to today’s action. They silently hold placards stating: “climate guardians” and “climate justice”.

Sam, their spokesperson, says that the angels, aged from 20 to 75, are here to help highlight the “belligerent behaviour” of the oil companies. “We believe that oil companies are creating mass problems for the planet” she says. “There is no more time. Our Government and leaders are failing us”.

As people rush through a small gap in the barrier to photograph the Angels, the Police let them through, but then refuse to let people back in again as the main protest starts. Again the new normal in France is preventing people from occupying public spaces. This does not seem like Liberté to me. 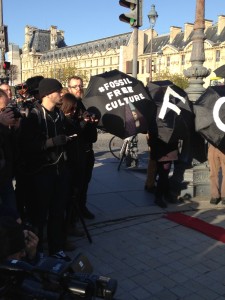 Suddenly by the pyramid, fifty or so umbrellas are lifted so that each umbrella makes up the words “Fossil free culture”. Then the singing starts in a rhythmic way. “Allez, Allez, oil money out of the Louvre” and “Total and Eni au revoir.”

People, like me, who have rushed to see the Angels, are now prevented by the Police from walking back to watch the protest. Suddenly a young man is bundled through the barrier by eight mean-looking riot police carrying a black umbrella. He is unsure whether he has been arrested or not: “I assume it is now illegal to use an umbrella in France” he says ironically.

He continues that “it is not acceptable for cultural institutions to accept money off oil companies. It is “despicable” the Louvre is taking oil money.

As the singing continues, inside the Louvre some ten activists have quietly entered and poured symbolic oil on the floor under the light of the great glass pyramid. They then took off their shoes and walked across the floor, leaving oily footprints in their wake.

One of them is Angie from the UK: “The Louvre should not be taking money off the oil companies, creating problems for the environment, indigenous people and climate change,” she tells me. 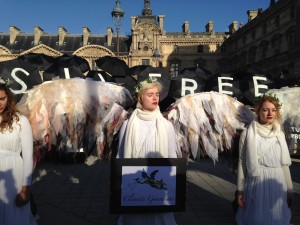 Meanwhile the singing gets closer as the moving umbrella protest walks through the barrier. It pauses allowing the “climate angels” to join them. The climate angels kneel infront of the umbrellas who continue to sing: “Allez, Allez oil money out of the Louvre”.

Dozens of photographers fight for the best picture. A red line is layed at the feet of the angels. The air is heavy with symbolism. 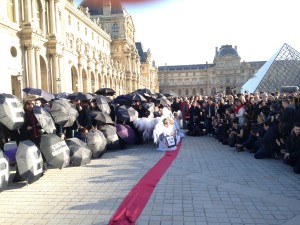 I ask one of the men holding an umbrella what today meant to him: “We are here as an international movement to kick oil companies out of art and culture.” He says iconic cultural institutions such as the Louvre give oil companies a “licence to operate”.

We have to “free our culture from oil” he says. And with that the umbrellas start walking again off into the Parisian sunshine.