Negotiators and delegates arriving at the conference centre this morning were greeted by a giant dinosaur, dozens of international youth, and a clear message: 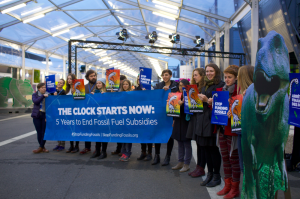 This great action is part of our central goal in Paris: to #StopFundingFossils. We need world leaders to stop funding the problem and start supporting solutions. In a new infographic we released yesterday, we showed that – on average – rich countries are spending 40 times more in public money subsidizing fossil fuel production per year than they have pledged to support poorer countries with Green Climate Fund contributions each year.

It doesn’t take much sleuthing to work out that if rich countries are struggling to find money to live up to their promises to support poorer countries to adapt to climate change and build clean energy economies, they can simply look to the billions that they hand out to Big Oil, Coal, and Gas each and every year.

The Green Climate Fund, one of the key channels for delivering support from wealthy to poorer countries to help them adapt to the impacts of climate change and transition to renewable energy, is currently getting just $2 billion annually from G7 countries plus Australia. Meanwhile, those same countries are handing out $80 billion per year to the rich, polluting fossil fuel industry.

The tables need to turn. Finance is a critical key in the ongoing climate negotiations, and unless poorer countries can trust that rich countries are going to deliver on their commitments, they will have very little reason to trust that everyone is at the table in good faith. This could threaten the outcome of the talks and the world’s chances at getting a deal that would help us move towards a safer climate future.

The energetic action today should remind decision makers and negotiators that this perverse and backwards use of taxpayers dollars isn’t fooling anyone. Funding the problem while at the same time claiming you don’t have the money to support the necessary solutions doesn’t pass muster.

World leaders say they want climate action – but they still use our $ to prop up fossil fuels. #StopFundingFossils pic.twitter.com/r84JgTsXCN — Alex Doukas (@adoukas) December 4, 2015

Not only has the world promised climate finance, but all of these countries (the G7 and Australia) have also promised to end fossil fuel subsidies for years through repeated (and so-far unfulfilled) promises at the G20 and other international fora. We are giving G20 countries 5 years to totally eliminate these subsidies (over 450 billion across the entire G20) and the clock has started ticking.

On the other hand, rich countries have promised at least 100 billion per year to poorer countries to support climate adaptation and action by 2020 and they recognized the urgent need for that number to grow from there. And for those that missed the action live, social media was abuzz with some great shout-outs on Twitter and Facebook. Even the United Nations shared a video of the action on their Instagram.

‘The clock is ticking’ – young climate activists at #COP21 in Paris call for an end to fossil fuel subsidies within 5 years – with a little help from T-Rex. Video @gisellalomax   A video posted by United Nations (@unitednations) on Dec 3, 2015 at 11:40pm PST

The jig is up! We are pointing leaders towards one of the most obvious win win situations you can imagine in these talks. #StopFundingFossils and live up to your promises to ramp up climate finance.