The rejection of Keystone XL today marks a turning point for energy decisions: in future, policymakers will be under pressure to consider climate impacts of any new policies and infrastructure.

But it is not only setting a bar for future energy decisions: the climate impact of stopping this pipeline is real. Last week we released analysis finding that the existing pipelines out of Alberta are already 89% full: if no more are built, tar sands production cannot grow.

Just hours after we published, Shell cancelled its 80,000-barrel per day Carmon Creek tar sands project, which was already half-built. The sole reason it gave was “the lack of infrastructure to move Canadian crude oil to global commodity markets”.

Keystone XL was one of five proposed new tar sands pipelines. We now see a real prospect that all of them will be stopped:

Nor is rail going to take KXL’s place. That’s not just our view: the crude-by-rail industry says it too. According to Stewart Hanlon, President & CEO of Gibson Energy, “Crude by rail is not a panacea. It’s not going to replace pipe.” And in case of any doubt, check out this chart of actual crude-by-rail shipments from Canada over the last three years: 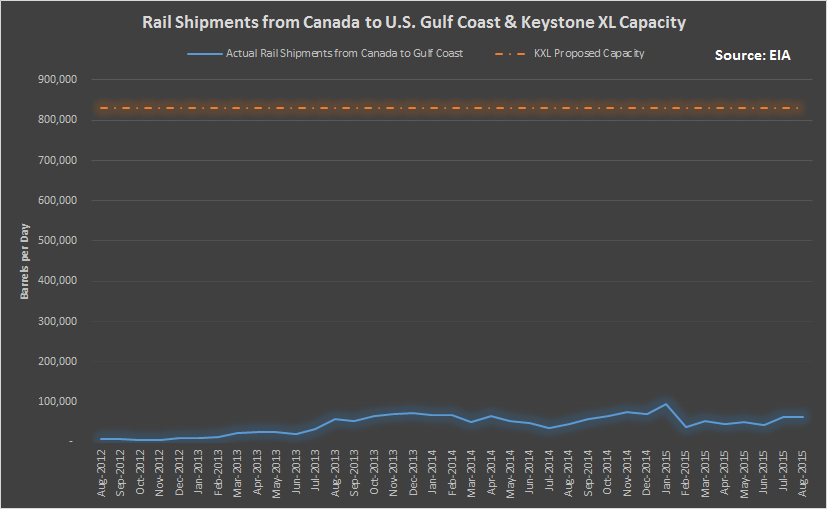 Perhaps unsurprisingly, today some commentators responded to Obama’s announcement with a collective shrug. Citing a recent article in the Wall Street Journal, some pointed out that tar sands are flowing in record volumes into the USA. Those claims miss the point. While new pipelines in Oklahoma and Texas over the last two years have eased past bottlenecks, that has pushed the chokepoint back to the border, where today’s decision hits.

So, ignore the commentators and industry spinners who say this decision doesn’t matter. Today, the climate movement succeeded in keeping a lot of carbon locked safely in the ground.