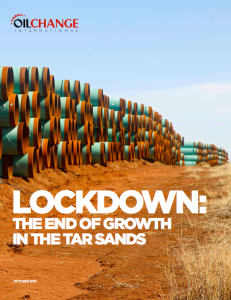 Lockdown: The End of Growth in the Tar Sands

The pipelines exporting tar sands out of Alberta are almost full, according to new analysis by Oil Change International. Without major expansion-driving pipelines such as Energy East, Kinder Morgan or Keystone XL, there will be no room for further growth in tar sands extraction and tens of billions of metric tonnes of carbon will be kept in the ground. This would be a significant step towards a safer climate.

All proposed new pipeline routes out of Alberta are facing legal challenges, opposition by local authorities and regulators, and broad-based public opposition. All of the major projects have been significantly delayed with some cancellations seemingly imminent. No pipeline has been built since 2010, despite active industry efforts.

Key findings from the report and the model on which it is based include: