Europe’s two largest oil and gas companies – which recently urged action on climate change – are still basing their projections for fossil fuel use on scenarios which would see catastrophic levels of global warming according to a new Energydesk analysis.

This came soon after Christiana Figueres, executive secretary of UNFCCC process urged EU oil majors – including BP and Shell, to be more ambitious on climate change.

In the build up to this year’s pivotal climate summit in Paris, BP and Shell have made headlines byarguing the world must act to limit emissions from fossil fuels – primarily by switching from coal to relatively clean-burning gas.

However their published forecasts for fossil fuel consumption – which do see a big increase in gas use – appear consistent with around four degrees of global warming.

This is regarded by the vast majority of scientists as highly likely to lead to severe impacts on the planet’s ecosystems and on people – including risking food security, sea level rises, worsening droughts, and increasing chances of violent conflicts.

The forecasts are important – not just because they affect investor confidence and influence the firm’s business decisions, but because they also support the firms’ communications designed to argue action on climate is consistent with large-scale fossil fuel use.

For instance, in a recent pitch for marketing ideas aimed at young people building up to the climate summit, Shell suggested that applicants use high numbers for energy demand – consistent with its scenarios – to create adverts designed to show the firm was serious about climate change.

In a letter to investors, the firm claims: “A fundamental transition of the energy system is needed but that will take considerably longer than some alarmist interpretations of the unburnable carbon issue would have the public believe.” Again, a view consistent with its projections.

Shell did not respond to Energydesk’s request for comment on its energy and climate scenarios, and whether they are used as a basis for their business plans.

BP, meanwhile, told Energydesk that their World Energy Outlook projections were based on its assumptions of what was “most likely”, and was considered as part of a “wide range of factors” for its business models.

In the documents Shell and BP have both been quite upfront about their energy scenarios being incompatible with the 2 degrees threshold – the internationally-agreed limit world leaders say we should aim to stay within.

Shell’s New Lens Scenario document states both of its scenarios “do not limit emissions to be consistent with the back-calculated 450 parts per million (CO2 in the atmosphere) 2 degrees C.”

You can see how much more carbon Shell’s forecasts would see emitted over the course of the century over the 2 degrees pathway in the firm’s own graph, below.

Meanwhile, BP goes even further. It says emissions will remain “well above” the two degree  path recommended by scientists in its outlook, and shows emissions failing to peak before 2020 (see graph below), in contrast to the IEA’s 2 degrees scenario. (By the way, in the 450 scenario there’s only a 50% chance of keeping global warming within the 2 degrees.)

In our analysis we have attempted to compare forecasts from Shell and BP to scenarios from the IEA which – unlike the oil giants – is transparent about the levels of implied global warming for its scenarios.

It’s very tricky to figure out the level of carbon dioxide emissions – and therefore global warming – under Shell’s and BP’s projections, because they don’t give us data from now till 2100. However, we can compare Shell’s and the IEA’s emissions forecasts up to 2050. 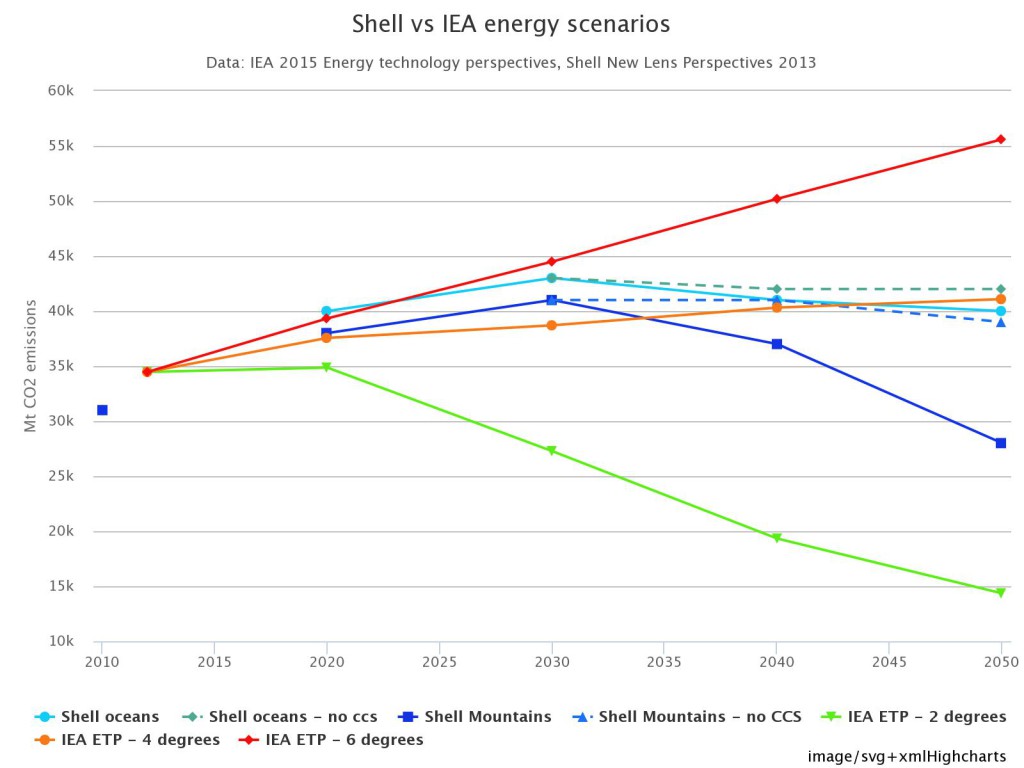 The above graph shows that Shell’s scenarios are not only over the IEA’s 2 degrees trend line, but in almost every scenario they are around 4 degrees by the middle of the century – although assuming this is the middle of a range of probabilities warming could be even higher, or lower.

Even in Shell’s Mountains scenario, which assumes a whole load of CCS comes to fruition warming is still above two degrees.

Shell has only invested in two CCS projects around the world and the firm’s CEO Ben van Beurdenrecently said the firm cannot invest more heavily in the technology because shareholders would be unhappy with the low returns.

This all suggests that Shell’s scenarios will probably result in around 4 degrees by the end of the century. They certainly don’t start peaking emissions early enough to achieve the deep cuts needed to stay within the 2 degrees threshold from 2020.

Interestingly Shell put data into DECC’s global emissions calculator. The model found both of Shell’s scenarios (though we don’t know if it was the more climate friendly versions of them, or not) still resulted in warming likely to be well above two degrees.

For BP we have far fewer data points. And though the firm – like Shell – won’t explicitly say how many degrees their forecasts will end up in, a spokesperson told Energydesk: “Our policy assumptions are closest to those in the IEA’s “New Policies Scenario” (NP), which assumes that announced national policy objectives are implemented. Yet our outcomes are closest to the IEA’s “Current Policies Scenario” (CP) and the EIA’s reference case, both of which assume no change in policy settings.”

The IEA estimates that CP is on a pathway towards 5.3 degrees of warming so this statement may indicate that their BP’s projections lead to emissions of over 5 degrees.

One thing that’s worth noting is that in Shell’s scenarios, and BPs forecasts, their emissions profile is higher than current pledges towards a global climate deal.

There’s only one figure for carbon emissions according to current commitments to reduce emissions globally from the IEA – 34.8 Gt of CO2 emissions in 2030 – and at the time the think tank published, China had not yet set out its internationally-significant pledge.

A recent analysis by the IEA found that existing national pledges to emissions reductions ahead of the talks would end up in 2.6 degrees by the end of the century, while Climate Action Tracker has this as closer to around 3 degrees. (Either way there would be a greater temperature increases after that date.)

Shell’s emissions levels in 2030 are nevertheless much higher than the IEA’s INDC forecast, as you can see below. 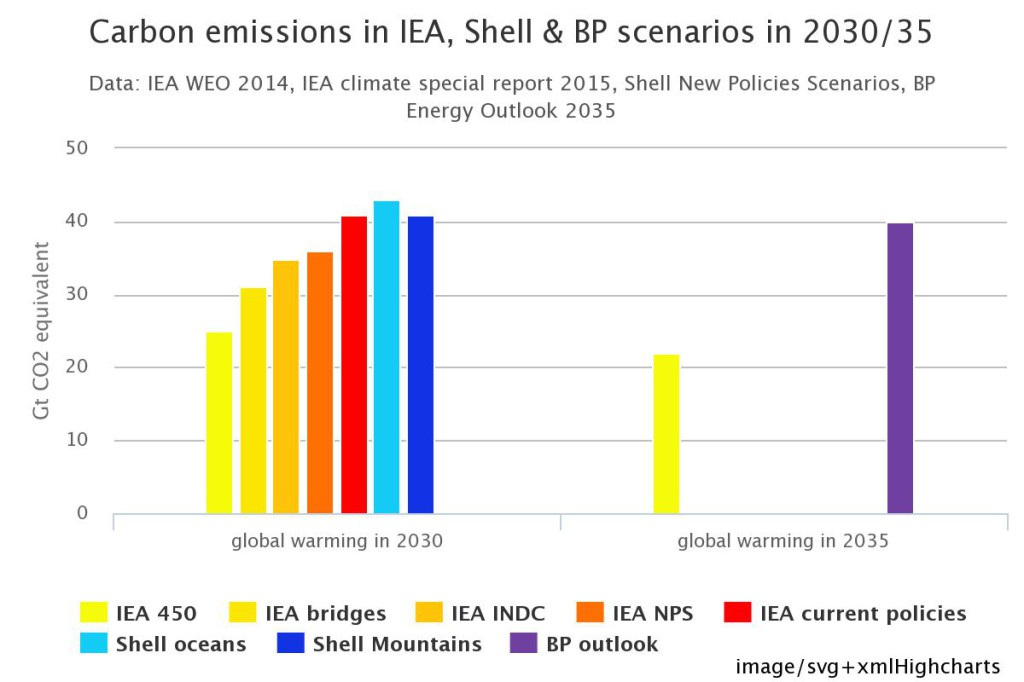 The INDC forecast – apart from not including China’s pledge – also doesn’t consider any progress that may be made following the Paris climate talks later this year.

You can also see that BP’s 2035 emissions are significantly higher than the level of emissions in IEAs 450 scenario (we didn’t have the any more data points for BP).

The fact Shell and BP’s forecasts overshoot 2 degrees – and most likely the current pledges countries have made – echoes that the firms are expecting weak climate action.

Again, BP and Shell haven’t been shy about this.

Shell have said they “do not see governments taking steps now that are consistent with 2 degrees C scenario”, while BP says in its outlook: “In 2035, CO2 emissions are 18 billion tonnes above the IEA’s 450 Scenario…The projections are based on our view of the most likely evolution of carbon related policies”.

Some analysts do suggest that 2 degrees is unlikely to be achieved – with unpredictable knock on impacts. However since Shell and BP released their projections there have been some major public interventions on climate change from beyond the political sphere including the Pope’s encyclical urging action on the issue, a seminal report from The Lancet warning of the health costs of runaway climate change; and Bill Gates pledging to double his renewables investments to try to “bend the curve” on climate change.

It remains to be seen whether the world’s governments will prove Shell and BP wrong and limit global warming to under the 2 degrees ceiling beyond the framework set by the Paris climate talks – but it does look like the oil majors are predicting warming of around one or one and a half degrees more than current climate ambition.

In short, the firms appear willing not just to disregard the chance of future policy action – but also the chance of current policies being fully implemented.

(NB:The values in our charts have sometimes been rounded up or down, and sometimes have been visually read off a graph.)