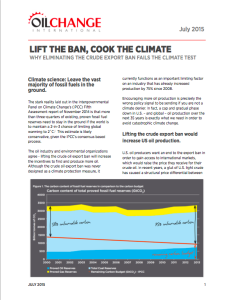 Today we’ve released a new briefing, entitled “Lift the Ban, Cook the Climate: Why Eliminating the Crude Export Ban Fails the Climate Test,” detailing why Congress and the President should stand up to current efforts by the oil industry to eliminate the ban on crude oil exports.

Over the years, the motivations behind Big Oil’s actions have become abundantly clear and consistent: It always boils down to protecting, and enhancing, oil executives’ ridiculous profits at the expense of anything that gets in their way.

The latest example can be seen in the halls of Congress, where the American Petroleum Institute and its friends have unleashed an army of lobbyists intent on killing a long-standing law regulating the export of crude oil in order to increase profits to the oil industry.

Removing the export ban would cause a hazardous increase in oil drilling in the U.S. and lead to increased climate emissions as well as dangerous oil transportation via rail and pipeline through towns across the country. Its impact on gas prices would be small at best, and pales in comparison to the risk the increased drilling would place on all of us.

Our new briefing released today details why ending the crude export ban fails the climate test and would imperil our communities. At a time of climate crisis, relaxing oil regulations is precisely the wrong move. We need to keep the oil in the ground.

You can find the new briefing, “Lift the Ban, Cook the Climate,” here and you can also read previous testimony to Congress on the subject, delivered by Oil Change International’s Executive Director, here.