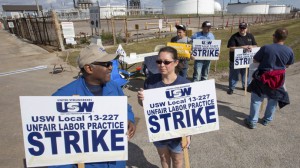 Yesterday, after a failure in new contract negotiations initiated this month by a group of major oil companies, the United Steelworkers announced a work stoppage at nine refineries, the largest refinery strike in nearly 35 years.

The reasons outlined by the Steelworkers for the strike couldn’t be clearer:

“This work stoppage is about onerous overtime; unsafe staffing levels; dangerous conditions the industry continues to ignore; the daily occurrences of fires, emissions, leaks and explosions that threaten local communities without the industry doing much about it; the industry’s refusal to make opportunities for workers in the trade crafts; the flagrant contracting out that impacts health and safety on the job; and the erosion of our workplace, where qualified and experienced union workers are replaced by contractors when they leave or retire.” – Steelworkers International Vice-President Gary Beevers, head of the Steelworkers National Oil Bargaining Program.

On behalf of more than 100,000 supporters, the Board and Staff of Oil Change International stand in solidarity with these striking refinery workers, and the important issues they have raised. So often as we fight Big Oil it can be hard to remember that the impacts of the industry and the fight for safer communities extend both inside and outside the fence lines.

Everyone has the right to good, safe working conditions. They are not something that can go out the window just because the oil price drops. We applaud the United Steelworkers for striking in order to keep their workers safe on the front lines of fossil fuel production. This is a high-risk industry from cradle-to-grave and we are fortunate to have highly skilled professionals that do their best to prevent the worst.

We look forward to the day when energy industry workers are able to focus on safer, just, and more stable jobs in a clean energy economy and aren’t tied to the profiteering whims of big oil.

USW International Vice President Tom Conway said it as well as anyone: “The problem is that oil companies are too greedy to make a positive change in the workplace…They continue to value production and profit over health and safety, workers and the community.”

While we know many of the issues will never be fully solved until we move away from fossil fuels, we stand with the workers fighting to keep the oil industry accountable to communities, to workers, and to all of us.