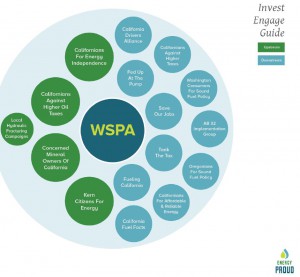 It has often been called the heart of public relations: but the third party technique is simple – it is putting your words in someone else’s mouth.

The oil industry are past masters of the technique – whether setting up front groups to fight climate change – like the Global Climate Coalition – or being involved in more generic ones, such as Citizens for a Sound Economy.

Often the clues are there in the title: Invariably, these fake groups adopt populist-sounding names, invoking words like “citizens,” “consumers”, “choice” or “Sound”.

If you see these types of word in a so-called “citizens” group, large alarm bells should start ringing as you realise these are generally fake Astroturf groups.

One such company that has set up a myriad of front groups is the Western States Petroleum Association (WSPA), one of the most powerful corporate lobbying organizations in California, whose members include global oil giants BP, Chevron, Exxon and Shell.

Now you might not be surprised that Big Oil often throws big money at lobbying.  But we are talking quite large numbers: the industry has spent over $70 million on lobbyists in California since 2009, according to a new report for the American Lung Association in California.

As well as this direct lobbying WSPA has set up / supported a myriad of Astroturf groups.

A Powerpoint from the company has been leaked from a presentation earlier this year to the Washington Research Council.  The Powerpoint details a plan to undermine AB 32, which is also known as the California Global Warming Solutions Act of 2006 as well as to thwart low carbon fuel standards in California, Oregon, and Washington State.

And central to the campaign are sixteen corporate front groups. As the powerpoint lays out: In 2014, WSPA “activated a significant number of campaigns and coalitions that have contributed to WSPA’s advocacy goals and to continue to respond to aggressive anti-oil initiatives in the West”.

Tim O’Connor, a senior attorney at the Environmental Defense Fund expressed surprise at the number of front groups being used. “I don’t think anybody knew how cross-jurisdictional, cross-border, and extensive their investment is in creating a false consumer backlash against [climate legislation].”

Meanwhile the WSPA is smarting that its powerpoint has been leaked, and has attacked a “handful of gullible news reporters” for revealing “WSPA’s secret formula for world domination.”

Whilst that is a slight over-reaction, what it does show is that it’s a continuation of the same strategy the industry has used for years to delay action on climate change.

As one blogger  for the Natural Resources Defence Council aptly put yesterday: “The outfits may change over the years, but as we are reminded yet again: beneath all the phony sheep’s clothing, it’s ultimately the same big bad wolf.”