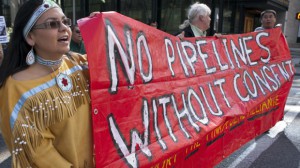 The clock is ticking.

Within the next ten days, the Canadian federal government is expected to announce its final decision on the controversial Northern Gateway pipeline, which will transport toxic tar sands from Alberta via British Colombia to the Pacific Coast.

It is expected that the government, desperate to open up new markets for the tar sands, will give approval.

But even if the Canadian government approves the pipeline, it does not necessarily mean that the pipeline will ever come to fruition.

As one local politician Nathan Cullen, who is the Official Opposition House Leader, wrote yesterday “Stephen Harper can approve the Northern Gateway proposal, but that doesn’t mean it will ever be built. With 130 First Nations and two-thirds of B.C. voters vote against it, Enbridge has no clear legal or democratic avenue to proceed.”

He points out that pretty much every community along the pipeline route has said “no.”

With such overwhelming opposition, the pipeline will face numerous technical and legal challenges.  Although the Northern Gateway has not garnered the same international attention as the Keystone XL pipeline, there is still huge opposition both internationally and nationally.

Earlier this month, 300 scientists wrote to Harper’s Government urging them to reject the pipeline. The scientists, from universities across Canada, as well as iconic institutions such as Stanford, Cornell and Oxford, argued that the recent review arguing for approval was flawed as it did not look at the increase in greenhouse gas emissions that will result from the expansion in tar sands production.

Kai Chan, an Associate Professor at the Institute for Resources, Environment and Sustainability at the University of British Columbia and one of the organisers of the petition said:

“It just feels like we’re ostriches sticking our heads in the ground, pretending like we care about climate change and that we’re taking action on it but then not even allowing it to be a consideration on these huge projects that obviously have ramifications for climate change.”

Nikki Skuce, a campaigner for the environmental group Forest Ethics Advocacy argues “It’s going to be caught up in the courts for years and it’s going to be ugly on the ground. People are willing to do what it takes.”

Yesterday, the country’s Natural Resources Minister, Greg Rickford said there had been significant progress with progress with First Nations. “I’m confident that we’ve laid the foundation for an effective dialogue moving forward,” he said.

But leaders of the three most powerful First Nation organisations in British Colombia remain opposed and angry with Harper’s government.

Grand Chief Stewart Phillip of the Union of B.C. Indian Chiefs warned that: “There is very, very little support for the oil pipeline in British Columbia.”

He added: “First Nations have said no, and in the event that the government of Canada continues to attempt to ram this forward, we’ll move into the courtrooms. There will be several protracted lawsuits”.

Clarence Innis, acting chief of the Gitxaala Nation on the North Coast, whose community is located on an island off the coast, are one community preparing a legal challenge.  “We’re going to do whatever we need to do to protect our territory,” he says. “We played by the rules. We’ve been ignored.”

So if the Harper government naively thought that the decision in the next few days was the end of the matter, they are in for a rude awakening.