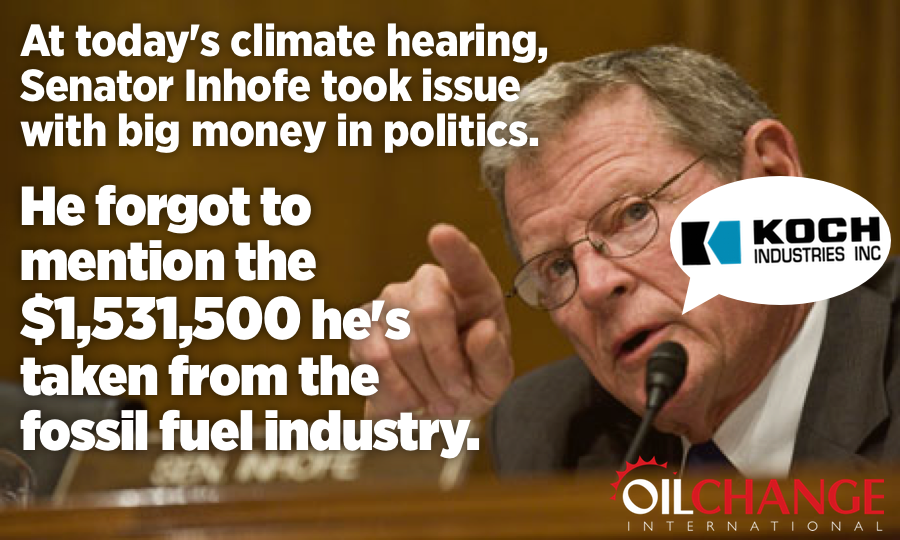 During today’s Environment and Public Works Senate Hearing on rural climate impacts, Senator Inhofe made a statement that — if it weren’t so telling of the fundamental problems in Washington, D.C — would by funny.

He made a valiant attempt at cherry picking the facts, calling out the ‘big money’ being spent to promote renewable energy. Distorting reality is nothing new for Senator Inhofe who has famously made a name for himself denying the scientific consensus on climate change.

What made his remarks particularly poignant was the major Senate Judiciary Hearing taking place down the hall discussing a potential constitutional amendment repealing the Citizens United and McCutcheon Supreme Court rulings that removed campaign finance limits.

Senator Inhofe is right, money in politics is one of the biggest problems facing our increasingly fragile democracy, but he gets the root of the problem entirely wrong.

As Senator Inhofe already knows, his campaign coffers are overflowing with industry money. According to our dirty energy money database, he has taken $1,530,500 from the fossil fuel industry during his career — that’s 33 times the median annual household income in his home state of Oklahoma.

If Senator Inhofe wants to point fingers at the problem of big money in politics, he should do it while standing in front of a mirror.

The other possibility in all this is that Senator Inhofe has finally woken up to the problems he has helped create. If that’s the case, we greatly look forward to Senator Inhofe donating his $1.5 million in dirty energy money to a worthy cause.