Between 2008 and 2013, the World Bank Group provided more than $3.1 billion in loans, equity financing, and guarantees for projects that involve fossil fuel exploration. The majority of this financing – $2.3 billion – was provided by the International Finance Corporation (IFC), the World Bank’s private sector arm, with the remainder from the Multilateral Investment Guarantee Agency (MIGA) and the International Development Association (IDA).

In all, the major multilateral development banks (MDBs)[2] supported $4.5 billion in financing to projects that included fossil fuel exploration activities between 2008 and 2013, with a combined $1.6 billion in financing in 2013. In addition, over the same period MDBs financed six technical assistance, capacity building and/or policy programs for governments that included support for fossil fuel exploration. 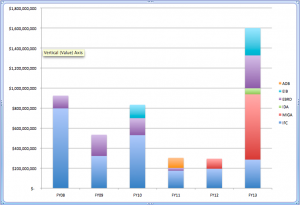 Of the major MDBs, the World Bank consistently provides by far the most support for fossil fuel exploration, accounting for nearly 70 percent of exploration project financing between fiscal years 2008 and 2013 (see Figure 1).

For years, policymakers around the world have agreed to the goal of limiting global average temperature increase to 2 degrees Celsius above pre-industrial levels in order to avoid catastrophic climate change impacts. Scientists have translated this goal into a carbon budget, which constrains how much of existing proven fossil fuel reserves can be burned to stay within those climate limits. The International Energy Agency warns that “no more than one-third of proven reserves of fossil fuels can be consumed prior to 2050 if the world is to achieve the 2°C goal,” a position that was further bolstered by the Intergovernmental Panel on Climate Change Fifth Assessment report released in 2013.[3]

Given that at least two-thirds of existing proven fossil fuel reserves amount to “unburnable carbon” and must stay in the ground, at the very minimum public financing should not go toward supporting fossil fuel exploration aimed at expanding these unburnable reserves.[4] Not only does expanding fossil fuel reserves put the global climate in danger, but exploration financing by the World Bank risks locking developing countries into loan commitments for resources that will likely become stranded assets if policies are implemented to reduce fossil fuel use and meet the 2-degree goal – measures that the World Bank itself strongly promotes, recognizing the disproportionate burden of climate impacts that will be felt by the world’s poor.

What counts as exploration finance?

Oil Change International classifies international energy lending into a variety of sectors based on details provided in program documents. Projects classified as fossil fuel exploration list one or more of the following among listed activities and/or objectives[5]:

Exploration is distinguished from oil and gas field or coal mine development, which is the establishment of production wells or mines and other infrastructure required to develop established reserves. In some cases fossil fuel development projects include additional exploration components, in which case they are classified as exploration.

Given the world’s rapidly warming climate and shrinking carbon budget, public finance from the World Bank and other MDBs should be redirected from fossil fuels toward projects that promote renewable energy and energy access. Ending all lending for fossil fuel exploration aimed at expanding unburnable carbon reserves should be the immediate first step in order to avoid fueling catastrophic climate change and locking developing countries into financing schemes for stranded fossil fuel assets.

[5] Projects classified as oil and gas exploration may include other components in addition to exploration activities.