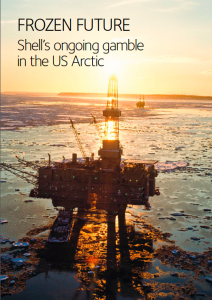 Operational failures, public pressure and legal challenges forced Shell to abandon its 2012, 2013 and 2014 US Arctic drilling programs but the company still remains committed, at least publicly, to the region.

Other oil majors – Statoil, Conoco-Philips and Total– have all stepped back from drilling for oil in US Arctic waters – largely at the project level – for reasons of cost, as well as regulatory uncertainty. Total has announced that it would not drill for oil at all in the Arctic Ocean due to the reputational risk of any spill in the region.

Despite spending  over £5 billion in the US Arctic Ocean so far – a figure that dwarves the expenditure of other oil majors – Shell has failed to drill for oil there.. Shell’s capital investment in 2013 is at a record high, while at the same time, the company has recorded a steep drop in profits.  Shell appears ready to ignore the economic, legal, operational, regulatory, reputational,  and environmental risks of the Arctic, all detailed in the report, in pursuit of highly uncertain returns.  ‘Frozen Future’ argues that shareholders should analyze whether the high cost, high risk US Arctic Ocean represents an appropriate allocation of shareholder capital.

The report explores a number of operational and economic risks facing Shell from offshore US Arctic drilling including: