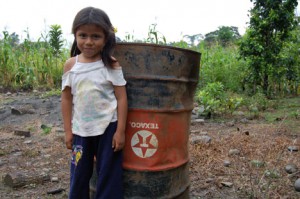 In the long and tortuous legal battle between indigenous communities in Ecuador against the oil giant Chevron, the plaintiffs scored a major victory yesterday in, of all places, Canada.

An Ontario appeals court ruled the indigenous communities have the right to pursue enforcement of a whopping $9.5 billion against Chevron’s assets in the country. In another set-back to Chevron, the court also ordered the oil giant’s two Canadian subsidiaries to pay $100,000 in costs to the Ecuadorians.

In a damning legal judgement, the three-judge panel of the Court of Appeal of Ontario said: “After all these years, the Ecuadorian plaintiffs deserve to have the recognition and enforcement of the Ecuadorian judgment heard in an appropriate jurisdiction.”

And they added: “At this juncture, Ontario is that jurisdiction.”

Not surprisingly the decision was welcomed by the Ecuadorians and their lawyers, with Humberto Piaguaje, a Secoya indigenous leader who is the director of the Assembly of Affected Communities, calling the decision “momentous.”  “It proves Chevron cannot hide behind legal technicalities to avoid justice,” he said.

Pablo Fajardo, the lead Ecuadorian lawyer for the villagers, added “This order will allow us the opportunity to hold Chevron accountable for fleeing the scene of its environmental crimes in Ecuador after a valid judgment was entered against it.”

The legal fight has been going on for years to try and make Chevron, which took over Texaco, pay for the toxic mess left by the latter oil company after years of drilling the Ecuadorian Amazon. The communities have always argued they need compensation to clean up billions of gallons of toxic waste Texaco left from 400 wells and nearly 900 toxic waste pits in nearly thirty years of operation.

But at first Texaco and then Chevron have always defended the charges. The arrogance of the oil giant was summed up when a Chevron lobbyist argued: “We can’t let little countries screw around with big companies like this – companies that have made big investments around the world.”

After eight years of a bitter legal struggle, some 80 communities in Ecuador’s northern Amazon region won their judgment in 2011. But Chevron has refused to pay the judgment, telling the US press that “We’re not paying and we’re going to fight this for years if not decades into the future.”

Chevron’s lead plaintiff also said that Chevron would “fight until hell freezes over and then fight it out on the ice.”

Slowly but surely hell is freezing over for the company. The legal fight has moved to where the company has assets:  in Brazil and Argentina as well as Canada.

Meanwhile the legal case in Ecuador trundles on. Only last month, Ecuador’s Supreme Court confirmed the finding against Chevron, but cut the damages in half, to $9.5 billion.

The Canadian judges obviously took issue with some of the issues thrown up by the lengthy legal struggle.

“For 20 years, Chevron has contested the legal proceedings of every court involved in this litigation – in the United States, Ecuador, and Canada.  Chevron even sought, and briefly obtained, a global injunction against enforcement of the Ecuador judgment. In these circumstances, the Ecuadorian plaintiffs should have an opportunity to attempt to enforce the Ecuadorian judgment in a court where Chevron will have to respond on the merits,” they ruled.

In a significant legal ruling, the judges argued that that jurisdiction over Chevron in Canada “properly opens the door to this hugely significant decision of Ecuador’s highest court possibly being recognized and enforced in a jurisdiction, Ontario, where enforcement may be significant to the parties.”

What will be deeply worrying for Chevron is that the company’s subsidiaries have an estimated $15 billion of assets in Canada, more than enough to pay for the entire Ecuador judgment.

Of course this will not be the end of the matter. Chevron is expected to appeal the ruling to Canada’s Supreme Court.