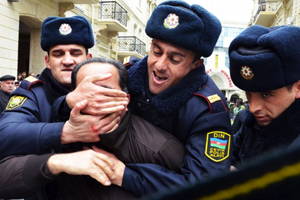 Today, the British Foreign Secretary William Hague is one of the first European politicians to visit Azerbaijan, a country with an appalling human rights record, since widely condemned Presidential elections.

As seasoned oil-watchdog, Platform London points out, the dignitaries have made the trip to attend the ceremony for the signing of a $45 billion pipeline agreement that will see two trillion cubic meters of gas pumped from Azerbaijan to Europe from the BP-led Shah Deniz 2 field.

The gas will be pumped via two pipelines:  The Trans-Anatolian Natural Gas Pipeline, or Tanap, which will bring the gas from Azerbaijan via the length of Turkey to the border with Greece.  From here the Trans-Adriatic Pipeline, or TAP, will run across Greece and Albania to Italy.

Platform points out that Hague’s trip, especially, has been criticised, coming as it does so soon after the internationally condemned Azerbaijani Presidential elections. The election descended into total farce when a government phone app appeared to release the election results the day before the polls opened. Not surprisingly, international observers concluded that the elections fell far short of international standards.

Emma Hughes from Platform said: “Hague’s trip follows hot on the heels of another undemocratic election in Azerbaijan. Making energy deals with this corrupt dictatorship means that the UK’s ‘dash for gas’ is contributing significantly to the political repression of democracy activists in Azerbaijan.”

A letter from UK and Azerbaijani campaigners and journalists has been sent to Hague calling on him not to attend the signing ceremony and instead to spend his time talking to Azerbaijani civil society.

According to Amnesty International, the UK is currently providing almost half of all foreign investment in the country, largely because of the BP gas field.

Amnesty’s head of policy and government affairs, Allan Hogarth, said: “Azerbaijan has an appalling human rights record and the country is currently embarked on a particularly aggressive crackdown on freedom of expression.” He called on Hague to seek guarantees on human rights, whilst he is in Baku.

Hague has dismissed these concerns, saying the project “adds to Europe’s energy security and competitiveness by opening up a new source of gas for southern Europe”.

Meanwhile, BP has also faced problems from its partners. The Financial Times is reporting this morning that Total and Statoil are dropping their interest in Tanap amid concerns about the soaring costs of the project.

The burgeoning costs of around $12bn have supposedly put off the oil companies. However, a spokesperson for Tanap said that Total and Statoil’s withdrawal, “will in no way impact the viability” of the pipeline.

Nor does it look like Azerbaijan’s appalling human rights record will put investors or politicians off either.