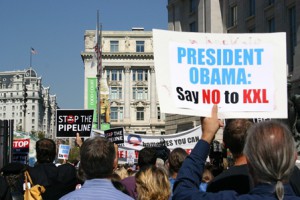 The Reuters news agency is reporting that Canada is running out of time to offer President Barack Obama some kind of concession on climate change that might allow Obama to approve the controversial Keystone XL (KXL) pipeline.

Earlier this year, Obama put climate change issues at the heart of his administration’s review of KXL, telling the Canadians that they could “potentially be doing more” to curb carbon emissions from the tar sands development.

The bottom line is that increasing tar sands production will mean that Canada will miss its target of curbing greenhouse gas emissions by 17 percent below 2005 levels by 2020.

But two long years of lengthy negotiations between the Canadian government and the tar sands industry to curtail carbon emission have not produced an agreement.  No resolution is in sight.

Oil producers are reluctant to pay anything more than the 10-cents-a-barrel carbon tax already imposed by the province of Alberta.

Any further fiscal costs are seen by the industry as undermining their already vulnerable profit margins.

One memo, released by Freedom of Information legislation sums it up: “Anything more stringent than today’s system will increase costs, possibly lowering investments and reducing production,” wrote the Canadian Association of Petroleum Producers in a memo to regulators last March.

So the tar sands industry is in a pickle. To give too much on carbon costs could undermine their investment strategy. To give nothing at all risks the KXL not being built at all.

It looks like stale-mate. Reuters reports that the clock is “running out” for Canada as the US State Department finishes work on a report that is examining the climatic impacts of the pipeline.  This report could be published any day.

And now Canada’s woeful record on climate emissions has also drawn criticism from within the country.

Earlier this month, a former senior Canadian government official used a keynote speech in Washington at a climate event hosted by billionaire Tom Steyer, to lambast the country as an environmental “rogue state.”

Mark Jaccard, an environmental economist, was on the Canadian government’s now-defunct National Round Table on the Environment and the Economy.

“On climate, Canada is a rogue state,” he said. “It’s accelerating the global tragedy … The U.S. government should reject Keystone XL”.