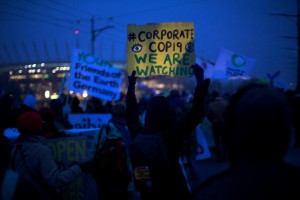 As we enter the crucial few days of the climate summit in Warsaw, the prognosis does not look good.

The UN is under fire for hosting a summit in a coal-addicted nation and the pace of progress is glacially slow, if not going backwards.

Influential nations such as Australia, Japan and Canada have all downgraded their climate change efforts. Australia has not even bothered to send a Minister to the climate talks. And in the last few days, Japan has announced it will cut its pledge to reduce its emission cuts from 25% to 3.8% by 2020, due to having to close its nuclear reactors after the 2011 tsunami. Canada too has also pulled out of the Kyoto agreement.

In short, Warsaw was only ever a stepping stone towards the major UN conference in Paris in 2015, where negotiators hope to force a globally binding climate change deal. The UN is drawing up a road-map towards Paris, where countries will have to pledge future emission reduction targets as part of a legally binding agreement. But as of today, the draft text contains no deadlines for agreeing concrete pledges.

In contrast, every day the problem gets worse. A report by the Global Carbon Project, published today has highlighted how global carbon dioxide emissions from burning fossil fuels will rise to a record 36 billion tonnes (39.683 billion tons) this year.

As Reuters reports this shows: “the failure of governments to rein in the main greenhouse gas blamed for global warming.”

The problem is that we are running out of years to fail in. “Governments … need to agree how to reverse this trend. Emissions must fall substantially and rapidly if we are to limit global climate change to below 2 degrees Celsius,” said the report’s lead author, Corinne Le Quere of the Tyndall Centre for Climate Change Research at the University of East Anglia in the UK.

Everywhere the science is telling us to be scared and to bring a sense of urgency to our collective inertia. To give you two quick examples: A new paper published in Journal of the Royal Meteorological Society which analysed data from polar regions argues that one of the key datasets used by climate scientists may be underestimating the trend in global warming by more than a half.

Other new scientific research shows that the current decline in Arctic sea ice is the fastest for a whopping 646 years.

Every year, the science gives us a greater sense of urgency and yet the politicians continue to prevaricate, especially at this year’s conference in Coal-la