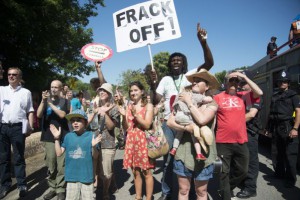 The oil barons do not always get what they want.

As fracking fervour sweeps across Europe, the region’s politicians yesterday narrowly voted to force energy companies to carry out in-depth environmental audits before they frack.

The new rules mean that large scale fracking projects would need audits based on “the direct and indirect significant effects” on human health, species and their habitats, land, water and climate.

The vote, which is being seen as a significant setback for the oil industry, was welcomed by some Members of the European Parliament.

“While this would not prevent permits from being granted, it would ensure a basic standard of assessment and public participation,” said Sandrine Bélier, a French MEP who is the spokeswoman on the environment for the Greens in Brussels. “This will help prevent risky shale gas projects being bulldozed through in spite of environmental concerns and public will,” she said.

It was also welcomed by environmental groups. The NGO Food and Water congratulated the MEPS for introducing mandatory audits, calling it a major victory.  In a press release, the organisation said that the vote “demonstrates a resolve among MEPs to avoid the negative impacts of an out-of-control boom in shale gas drilling in the United States.”

Food & Water Europe’s policy officer Geert De Cock said: “This vote to impose a mandatory EIA for all shale gas drilling was a litmus test for the resolve among MEPs to demand an adequate risk-management framework for shale gas activities in Europe.”

However, some MEPs are scaremongering that the move could hinder the technology on the continent.

Struan Stevenson, a Conservative MEP, who sits on the European Parliament’s influential Environment committee, has warned that new plans could “strangle” the fracking industry, especially in countries like Britain.  “This would be a huge burden and will prevent the exploitation of Britain’s massive shale reserves,” he said.

The reaction from industry was predictable. Alessandro Torello, of the International Association of Oil and Gas Producers, said the moves would require “undertaking long and complex environmental studies at a very early stage in the exploration phase, undermining – without bringing additional environmental benefits – the efforts to develop domestic oil and gas opportunities, such as gas from shale”.

Torello was also quick to use the old “jobs at risk” lobbying argument.  “This would erode EU attempts to encourage future economic growth and create new jobs while simultaneously depriving policy makers of one key tool they could use to reduce Europe’s dependence on energy imports,” he added.

The powerful business lobby group, BusinessEurope, which has oil and gas companies as influential members, also condemned the vote:  “In its current form, the proposed revision clearly goes against the trend to minimize the regulatory burden on business in order to facilitate the economic recovery and strengthen the competitiveness of our industrial core in the E.U.,” said Markus J. Beyrer, the organisation’s Director General.

The move has yet to be finalised by Europe’s Environment ministers who meet next week, so expect intense lobbying by the oil and gas industries to water down the proposals.