In the opening of President Obama’s June 25th remarks on climate change at Georgetown University, he said to the younger audience members in the crowd: “It was important for me to speak directly to your generation, because the decisions that we make now and in the years ahead will have a profound impact on the world that all of you inherit.” 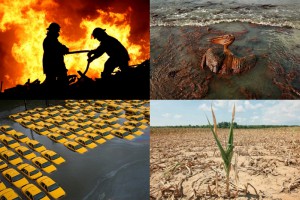 The President then went on to lay out a scary picture of a year’s worth of climate-related impacts in the U.S. alone: “Here at home, 2012 was the warmest year in our history. Midwest farms were parched by the worst drought since the Dust Bowl, and then drenched by the wettest spring on record. Western wildfires scorched an area larger than the state of Maryland. Just last week, a heat wave in Alaska shot temperatures into the 90s.”

And just days after the President’s speech, 19 elite firefighters were killed in an unusually erratic and hot wildfire in Arizona after a blistering and dry spring in the area.

Meanwhile, recent reports from scientific and financial experts suggest that if we do not change the trajectory we are currently on, our fossil fuel energy use is going to make the extreme weather we see today seem tame. At the end of 2012, the International Energy Agency released an analysis concurring with previous reports from experts such as those at the Carbon Tracker Initiative who have suggested that a vast majority of the world’s proven reserves of fossil fuels must stay in the ground if we are to have any hope of maintaining a climate suitable for a healthy society.

Put another way, experts say we must leave at least 66% (and likely even more) of the global reserves of fossil fuels in the ground in order to have any chance for a safe climate in our future.

This is hard to swallow. We’ll be the first to admit it. We are increasingly facing a reality that is scarier by the day to admit exists. But it does. And in the face of this information, our leaders are faced with a challenging dilemma.

There are those who accept the scary reality of climate change and admit that we must make drastic changes to our energy system in order to stabilize the climate. In accepting this reality, they face down the efforts to corrupt our democracy and block progress by a fossil fuel industry that has more money and political power than nearly any entity on earth. 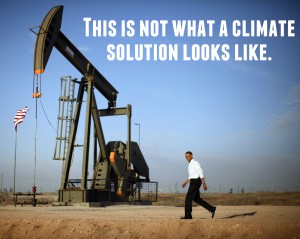 Others simply pay lip service to the climate realities that are slapping them in the face while avoiding making hard choices. They promote a so-called “All of the Above” energy plan that includes more fracking, drilling, and fossil fuel infrastructure, appeasing an industry that can help keep them in office with their massive political spending. But more importantly, they inappropriately downplay what the actual impacts of climate change already are and what they will be in the future.

You could almost forgive those choosing the “All of the Above” path for taking the easy road… except for the fact that the fate of the planet is at stake.

It’s time to call it like it is: anyone who pushes an “All of the Above” energy strategy that would dig up more than a third of our current fossil fuel reserves is simply in denial about the realities of climate change.

Put simply, “All of the Above” energy proponents are the newest climate deniers.

You can’t say climate change is a problem and then turn around and promote the very energy sources that are making it happen. You can’t say the problem is urgent and then drag your feet in making the necessary changes. You can’t be a climate champion and also an “All of the Above” proponent.

This may sound harsh, but unfortunately the time has long come for some tough love. We are digging our way to climate disaster, and if we don’t stop digging we very well may get there. 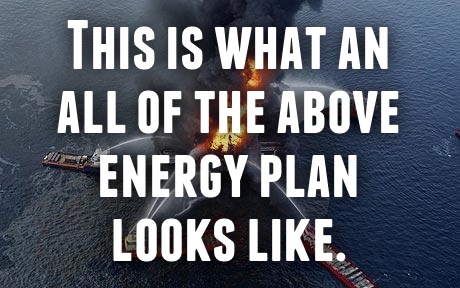