Last week, as part of their continued lobbying for the Keystone XL pipeline, TransCanada sent a letter to the State Department outlining “its view of the facts as they pertain to the Project’s contribution to GHG emissions.”  Unfortunately, it appears TransCanada does not have a very good vantage point from which to view the facts, as the letter is riddled with statements that have been proven wrong.

The first of their assertions in the letter is regarding the oil market.  The letter states, “global crude oil demand is static.” This statement is not only inaccurate in the current market, but also reveals a view of a future oil market that would lock in dangerous climate change.  Below is a graph from the International Energy Agency that lays out what oil demand must look like if we are to stay below 2 degrees C of global warming (the globally recognized “safe limit”), found in our recent report on Keystone XL’s associated greenhouse gas emissions.

As the graph shows,  US oil demand in a future in which we live up to our commitment to keep global warming below 2 degrees C must decline steeply and not remain static.

Later on in the letter, TransCanada suggests that “current production is expected to nearly triple within 12 years.”  Our previous analysis has looked at what this would mean for the climate. The resulting graph is striking: 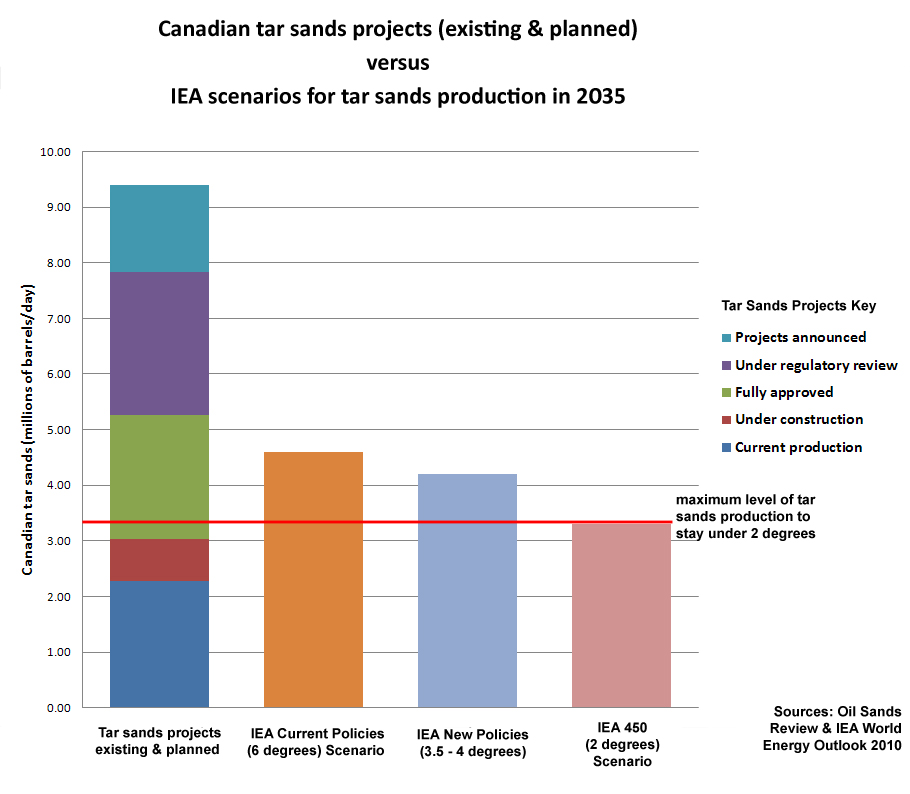 In other words, tar sands planned growth is 3 times the climate limit.

TransCanada continues to put forward a flawed and outdated analysis of the oil market in the United States by saying that “the oil sands production that is expected to be transported by the Keystone XL Project would displace those Venezuelan and Mexican crude oils.”  Again, a recent Oil Change International analysis meets this argument head-on.

Below is a brief rebuttal of this assertion. More is available in the full report.

In comparing Venezuelan heavy oil and tar sands crude, TransCanada says, “there is no significant difference in lifecycle GHG intensities between the product proposed to be carried by Keystone XL and similar heavy crudes.”  Putting aside the fact that tar sands is indeed the dirtiest of the dirty oils, this statement is like saying that there’s no difference between a cigarette and a cigar. Both can give you cancer – the point is that you shouldn’t be smoking (or burning) either.

Another point TransCanada trots out is its assertion that “this critical resource will be developed.”  Meanwhile, their colleagues in the industry say otherwise. A few examples:

“In the event that either the Keystone XL newbuild or Alberta Clipper expansion (or both) encounter further delays, we believe risk would grow that Canadian heavy oil/oil sands supply would remain trapped in the province of Alberta, putting downward pressure on WCS pricing on both an absolute basis and versus WTI.” — Goldman Sachs report: Getting oil out of Canada: Heavy oil diffs expected to stay wide and volatile, June 2013.

TransCanada cites “numerous other pipeline projects” as alternatives to Keystone XL. However, an objective view of other proposed pipelines makes it clear that they are far from sure things. Here’s David Roberts on those pipeline projects:

If activists can block Keystone, yeah, there are other possible routes to get the tar-sands oil out. So … activists will fight those, too. Tar-sands producers want to ship the stuff west? Well, there’s the small matter of a wall of First Nations opposition (and in Canada, unlike the U.S., indigenous tribes have real political power). They want to ship the tar sands east? Well, there’s a coalition of enviro groups fighting that too, pulling together some impressively large rallies.

Next they say “transportation of crude oil by rail has experienced tremendous growth.”  Unfortunately as we were so tragically reminded of recently with the shocking disaster in Lac Mégantic, Canada, oil by rail has its own dangers. 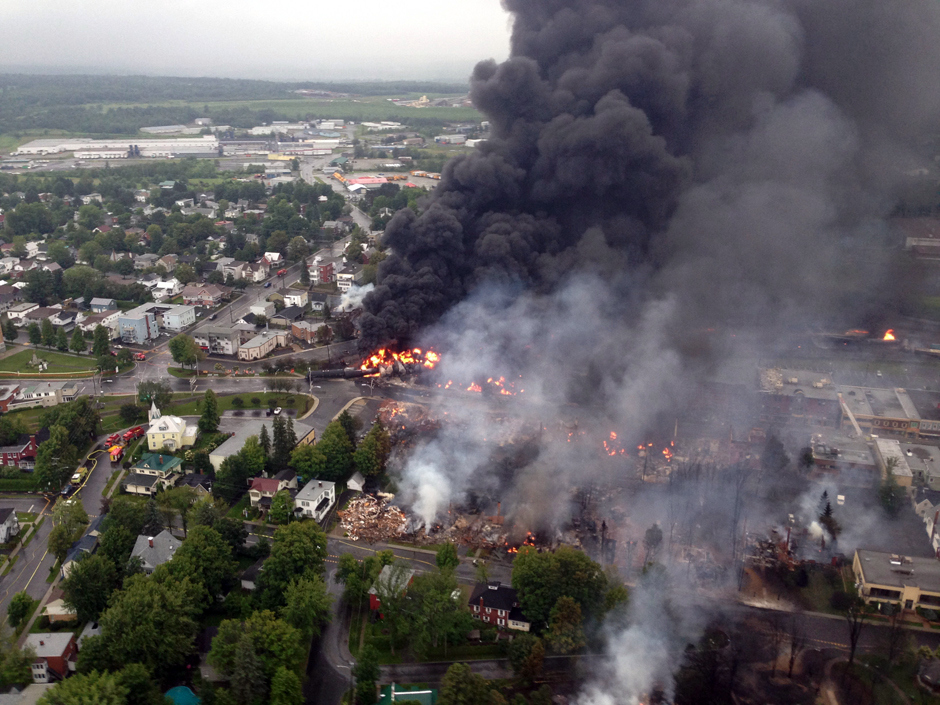 While we still don’t know what caused the Lac-Megantic train disaster, we do know that the rail cars involved were spill prone. The Canadian Transportation Safety Board has warned since 1994 that the susceptibility of these tanker cars “to release product at derailment and impact is well documented. The transport of a variety of the most hazardous products in such cars continues.”

Beyond the very real safety concerns, it is clear rail can’t handle the type of expanded oil production that the tar sands promoters would like.  In our recent letter to the State Department along with the Sierra Club, NRDC, Bold Nebraska, Center for Biological Diversity and National Wildlife Federation we pointed to analysis we had previously submitted that shows otherwise, but also pointed out that this has been rebutted by the EPA, Goldman Sachs, and Enbridge among others.

Even investors are expressing concern about tar sands development in the face of Keystone XL’s delay. In the past few days, U.S. investors were reported to have cut their shares in tar sands stocks, largely due to impacts from the delay in the Keystone XL project and the lack of pipeline capacity.  From Bloomberg news:

“You’ve got a theoretically valued resource that can’t come to market,” Ted Harper, who helps oversee more than $9 billion at Frost Financial Management Group in Houston, said in a phone interview yesterday. He pointed to Keystone XL’s delays and challenges facing other proposed Canadian export pipelines. “U.S. investors tend to be more shorter term in terms of their returns focus than their Canadian and European counterparts.”

Canada’s Harper Government is not serious about tackling climate change

With respect to mitigating efforts to offset greenhouse gas emissions TransCanada attempts to show Canada as a leader in taking strong action to address climate change. But the fact is that Canada has actually been a leading opponent to strong global action on climate change, having received the award for most obstructive nation at the international climate talks for several years running. Indeed, Canada has pulled out of the Kyoto Protocol, has admitted it will not meet its climate mitigation pledges, and is on pace to blow past its 2020 emission reduction commitments.

The only conclusion that can be made from TransCanada’s letter is that their “view of the facts” is distorted by the profits they expect to make should Keystone XL be built.  Any clear-eyed view of the actual facts shows that Keystone XL is a climate disaster and will very clearly and significantly increase the problem of carbon pollution.