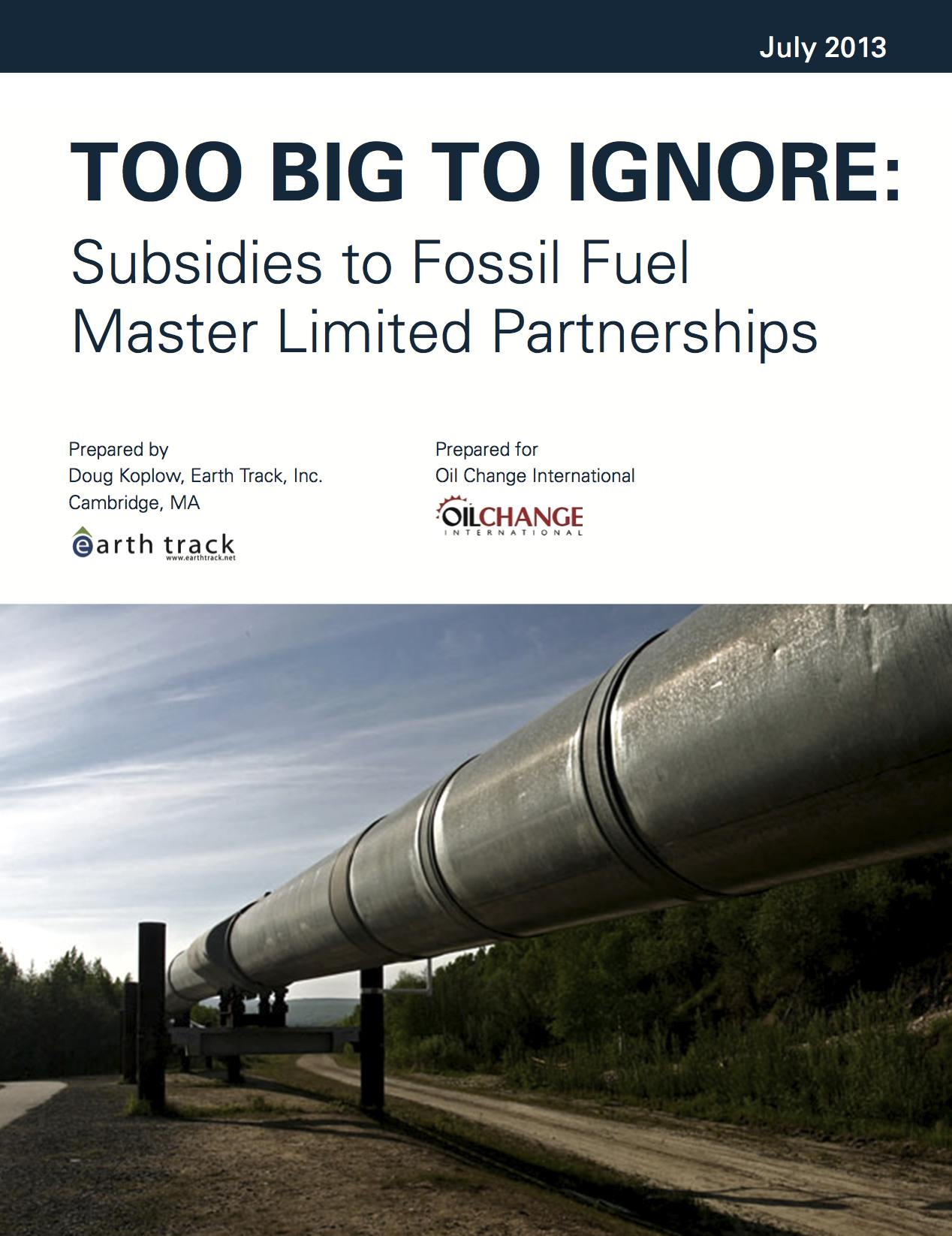 Today we’re releasing a new report with Earth Track that exposes some $4 billion per year in new fossil fuel subsidies which have gone unaccounted for in previous estimates. And what’s worse? It’s growing.

Our new analysis dives into a shady corporate structure called “Master Limited Partnerships (MLPs)” and seeks to do a more thorough job of quantifying the value of tax avoidance the fossil fuel industry is able to enjoy by utilizing these structures. MLPs were largely ruled out by the IRS for most US industries some 25 years ago, but special rules continue to provide eligibility for fossil fuels, and have allowed a growing range of oil and gas activities to escape corporate income taxes entirely.

The report, entitled “Too Big to Ignore: Subsidies to Fossil Fuel Master Limited Partnerships,” finds that the oil, gas, and coal sectors have increasingly dominated the MLP universe, now comprising well over three-quarters of the total. Existing estimates of the taxpayer costs associated with fossil fuel MLPs are deceptively low, reducing the pressure to end this tax break once and for all.

Who is benefiting from MLPs? Many oil, gas and pipeline companies you’ve likely heard of, including Enbridge, Sunoco, and TransCanada.  These MLPs not only enable firms to escape corporate income taxes on profits, but they allow their partners to delay most tax payments on distributions for many years – a huge benefit.

Forbes magazine – not the most liberal of outlets – has called MLPs an “income and a tax shelter rolled into one investment.” And we continue to provide this double benefit to fossil fuels more and more each year.

According to the new report, MLPs cost the US treasury as much as $13 billion in lost tax revenue between 2009 and 2012. Previous estimates put this figure six times lower. And this number, in the absence of any action otherwise, is only expected to grow.  Fossil fuel interests continue to convert to MLPs at an alarming rate through asset spin-offs, mergers, and by seeking expanded eligibility granted not only by Congress, but also through rather secretive IRS rulings.

Fossil fuel subsidies like the benefits received by the use of MLPs continue to help these companies dig up the fuels that are burning our climate. Not only does the U.S. oil boom imperil our communities and climate, but the increasing use of Master Limited Partnerships allows the industry to pay even less of its share of the taxes needed to support those same communities. The fossil fuel industry is busy destroying our air, water, land, and climate, all the while finding new ways to avoid taxes.

And as report author, Doug Koplow of Earth Track said:

“Tax subsidies to fossil fuels through Master Limited Partnerships go against both the fiscal and environmental interests of our country, yet are repeatedly overlooked in most federal oversight reports on subsidies. Though recent efforts have looked to expand Master Limited Partnership subsidies to some renewable energy resources, the evidence suggests that the fossil fuel sector will continue to capture the vast majority of the MLP subsidies even with an expansion.  In the context of the climate crisis we face, the continuation of this subsidy to fossil fuels is inappropriate regardless of any potential benefits to new industries.”

The report can be found here.

Our press release announcing the report can be found here.