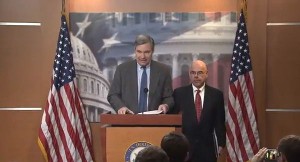 Two prominent Congressmen, Representative Henry Waxman and Senator Sheldon Whitehouse yesterday called on the State Department to correct “significant mistakes” in its draft evaluation of the environmental impact of the Keystone XL pipeline.

In a strongly worded, twenty-page letter, the Congressmen argued that the State Department’s analysis of KXL and climate emissions was “fundamentally flawed”.

The two urged the State Department to “do a better job in analysing the effect that KXL would have on the development of the Canadian tar sands and the additional carbon pollution that would result”.

They ask the State Department to develop the information needed to provide a “thorough, unbiased, and comprehensive” analysis of the pipeline’s impact on the climate.

They added that “we are not just bystanders evaluating livelihoods over which we have no influence. And we should not be investing in infrastructure and locking in higher emissions for decades to come, which will make it significantly more difficult to avoid catastrophic climate change.”

The State Department’s conclusion that the project would not affect tar sands expansion was “contrary to basic economics, the best evidence, and widely held expert opinion among financial analysts, the oil industry, and Canadian government officials”, they argue.

The two also take issue with the hotly contested conclusion by the State Department that the tar sands could get to market even without the building of KXL.

This analysis “fails to properly account for the very substantial uncertainty that is inherent in its projections by assessing a full range of scenarios”.

The two politicians outline  how the State Department’s rail analysis had “significant flaws”, even quoting Joe Oliver, the Canadian Minister for Natural Resources who has said that no one felt that rail was a “substitute for pipelines”.

The litany of errors of the State Department’s report is carefully refuted. The estimates of future tar sands production changes were based on “uncertain and unrealistically limited scenarios”.

As to its final conclusions, they “appear completely disconnected from a vast array of opinion which views KXL as critical to realising the tar sands industry’s plans for expansion”.

The failure of the State Department to seriously evaluate whether the denial of KXL would have a significant effect on tar sands expansion was a “fatal flaw.” They also argue that the State Department’s Impact Assessment did not properly address the difficulty of tidying up tar sands oil.

“The President was absolutely right when he said that the pipeline will not be in our national interest if it has significant adverse impacts on the climate,” said Rep. Waxman.  “I believe a rigorous analysis will show that the Keystone XL pipeline fails the test the President has set forth and must be denied.”

“The tar sands oil to be transported by the Keystone XL pipeline would wreak havoc on our climate by unleashing up to 22% more carbon pollution than average crude oil refined in the U.S.,” added Senator Whitehouse.  “With communities in Rhode Island and around the country already suffering from the effects of carbon pollution, we can’t afford to make things worse.  I hope the Administration finds our comments constructive, and that it ultimately rejects the pipeline.”