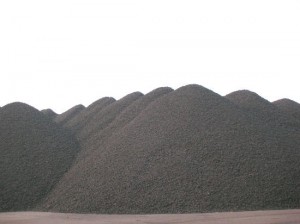 In January this year Oil Change International exposed a dirty overlooked secret of the tar sands.

Called petcoke, it is a by-product of the tar sands process, which is so dirty it emits five to ten per cent more carbon dioxide than coal.

The report also pointed out that the use of petcoke in the tar sands was in danger of turning American refineries into coal factories. It was an instant hit and generated a significant amount of media and political interest.

Now it has been revealed that Canada has some 80 million tons of petcoke stockpiled waiting to be burnt.

A member of the Canadian Parliament has publicly said he wants an investigation with the United States into one such stockpile – a three-story mound of petcoke piling up near the Marathon refinery in Windsor along the Detroit River. The MP, Brian Masse, wants the Bilateral Agency which governs the Great Lakes area, to investigate the pile accumulating in Detroit.

“Here’s a little bit of Alberta,” Brian Masse told the New York Times. “For those that thought they were immune from the oil sands and the consequences of them, we’re now seeing up front and center that we’re not.”

The petcoke pile is now so big it is three stories high.  According to the article in the Times, the black mountain is the “unloved, unwanted and long overlooked byproduct” of Canada’s tar sands boom.  As Lorne Stockman, from Oil Change who wrote the original coke report, told the paper “It’s really the dirtiest residue from the dirtiest oil on earth.”

To make matters more ironic is that this climate-munching mound is owned by Koch Carbon, a company controlled by the highly secretive and controversial Koch brothers, who fund a huge network of climate denial think tanks. The brothers have been repeatedly exposed by great muckraking by Greenpeace and others.

Other local politicians are angry too: “What is really, really disturbing to me is how some companies treat the city of Detroit as a dumping ground,” argues Rashida Tlaib, the Michigan state representative for that part of Detroit.

Residents are worried about the environmental effects of the black mountain and now the US Environmental Protection Agency has said that it will no longer allow any new licenses permitting the petcoke burning in the United States.

This means that the Detroit pile may well be exported to countries with less strict environmental regulations. The New York Times points out that one of the world’s largest dealers of petroleum coke is Oxbow Corporation, which flogs about 11 million tons of the stuff a year. It too is owned by a Koch brother, William Koch, the brother of David and Charles.

So between the three of them they really are helping to screw the climate.