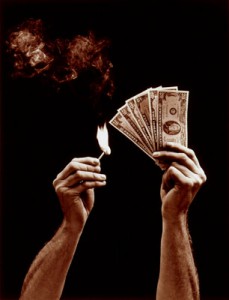 On April 22, more than one million comments opposing the Keystone XL pipeline were delivered to the State Department.

The EPA weighed in too. In its review of the State Department draft Supplementary Environmental Impact Statement (SEIS), the EPA identified “significant environmental impacts” and noted that full assessment of these impacts was not possible due to insufficient information.

One of the missing pieces of information is an estimate of the damage – translated into dollars – that Keystone XL’s climate pollution would do to health, property, agriculture, ecosystem services, and more.

That estimate, provided here, ranges to over $100 billion per year.

The Obama Administration has made clear that estimating this cost – the “social cost of carbon” – is a “critical step in formulating policy responses to climate change.”

The Department of Defense points out that climate change “may have significant geopolitical impacts…contributing to greater competition for more limited and critical life-sustaining resources like food and water[…] [E]ffects of climate change…may act as accelerants of instability or conflict…[and] may lead to increased demands for … humanitarian assistance or disaster response.”

The Department of Homeland Security states that “[i]ndirectly, climate change acts as a “threat multiplier,” aggravating stressors abroad such as poverty, environmental degradation, and social tensions, resulting in conditions that could enable terrorist activity, violence, and mass migration.” It also details the threat climate change poses to domestic ecosystems and infrastructure and the costs this may impose on the U.S. economy.[i]

In this new and changing climate context, attempts to monetize damages are crucial to help better inform decision-making.

In 2009, the Council of Economic Advisers and the Office of Management and Budget convened an interagency group, with regular input from the Council on Environmental Quality, National Economic Council, Office of Energy and Climate Change, and Office of Science and Technology Policy. The Environmental Protection Agency and the Departments of Agriculture, Commerce, Energy, Transportation, and Treasury were also active participants.

In 2010, this Interagency Working Group on the Social Cost of Carbon (IAWG) offered a provisional estimate of the social cost of carbon (SCC) for carbon dioxide; i.e., they estimated the dollar value of some of the damage done to human society, per metric ton of CO2, as that ton is added to the cumulative global sum of emissions.

The IAWG emphasized that its analysis has a “number of limitations” and that the estimates are “incomplete.” To take just one example, Ocean Acidification, a “potentially large damage from CO2 emissions” is not quantified in the analysis (let alone monetized).

Further, the IAWG used a limited set of discount rates and “provided a rationale for the upper end discount rates it selected, but did not do the same for excluding lower values”.[ii] High discount rates yield low estimates of the cost of damages.

According to Senator Sheldon Whitehouse [D-RI], the Administration is currently reassessing the low SCC estimates published in 2010 obtained from the unbalanced set of discount rates. By including the previously excluded lower discount rates, while otherwise applying the same IAWG methodology, the upper-range SCC estimate increases by an order of magnitude.[iii] Therefore, while the methodology for calculating the social cost of CO2 is still developing, the range of possible cost estimates is very wide, ranging from $5 to as much as $758 per ton. (See Endnote iii)

Because the difference in lifecycle emissions between tar sands oil and average U.S. crude is “a major focus of the public debate,” the EPA expects State to estimate the monetized damage based on this difference in emissions, i.e., based on “incremental” emissions relative to a business-as-usual average-U.S.-crudes scenario.

But business-as-usual, aka “current policies”, has, in the words of the chief economist of the International Energy Agency, “catastrophic implications for all of us.” Guaranteed climate catastrophe is clearly a disastrous basis for policy-making and we need to start measuring policies against scenarios that avoid disaster. This is one reason why estimating the social cost of the climate damage of the Keystone XL pipeline should not be based on the incremental emissions relative to a conventional fossil fuel scenario, but instead should be based on the pipeline’s full climate pollution footprint.

As it turns out, this “full footprint” approach is the approach the International Monetary Fund took earlier this year when estimating the current global fossil fuel subsidy arising from the failure to put a price on climate pollution.[iv]

As previous Oil Change International analysis has shown, the Keystone XL pipeline’s total carbon footprint would be over 181 million tons of CO2e per year.

Using the IAWG SCC estimates, Keystone XL’s social cost of carbon would range from $1 billion to over $10 billion per year, in the pipeline’s first year of operating.[v]

In emphasizing the importance of considering the full range of SCC estimates, the IAWG points out: “no consensus exists on the appropriate [discount] rate to use in an intergenerational context.” However, this point applies not only to the range of discount rates the IAWG did consider, but also to discount rates that they did not consider. Taking this fuller range into account, Keystone XL’s SCC price tag could range from $1 billion to over $100 billion in the pipeline’s first year of operations, and grow from there.[vi]

If society has to subsidize Keystone XL to the tune of billions of dollars per year, maybe over $100 billion per year, how can it possibly be in the national interest?

So far, the State Department’s assessment has failed entirely to consider the social cost of carbon. Until government agencies properly account for the cost of climate change caused by major fossil fuel infrastructure, projects like Keystone XL will continue to impose disproportionate costs on society. The failure to account for those costs is at the root of our failure to address global climate change and its consequences.