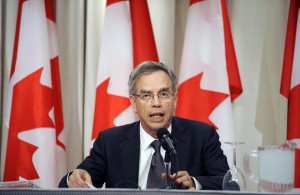 One of Canada’s most senior politicians is back in Europe on yet another lobby tour to try and bully politicians there to ditch their landmark climate legislation as it discriminates against the dirty tar sands.

A key focus of his tour will be the EU’s flagship Fuel Quality Directive (FQD), which the Canadians  have been trying to derail for several years now, using a mix of lobbying, bullying, and open trade threats.

The Canadians have forced the FQD to be delayed time and again, and if the legislation gets delayed beyond the end of this year, it may be abandoned all together. It is no surprise that when in Brussels, Oliver will meet with senior officials from the European Commission as well at bosses from oil giants Shell and Total, which have interests in the tar sands.

Speaking at the beginning of his trip, Oliver reiterated a key message that the FQD should be changed to ensure it does not discriminate against the tar sands.

“We think that’s critical as an alternative to what we view as a flawed and ineffective approach that’s proposed by the commission,” he told Reuters in an interview from Paris.

What the Canadians are concerned about is two things: firstly that the FQD sets an international precedent and secondly they hope to export tar sands to Europe via the controversial Keystone XL and they do not want concerns over climate to undermine a potentially lucrative export market. “We’re not exporting to the EU at the moment but we don’t want to see our crude oil stigmatized”, says Oliver.

Oliver was outraged over the week-end when former American Vice-President and Nobel Peace Prize winner, Al Gore, joined the long list of people who have criticised the tar sands, arguing its development was hurting Canada’s image.

In highly undiplomatic language, Gore lambasted Canada for “adding to the reckless spewing of pollution into the Earth’s atmosphere as if it’s an open sewer.”

Likening the tar sands to an “open sewer,” has not gone down well with Oliver, who retorted that Gore “shouldn’t be given a free ride” for comments he called were “over the top.”

Oliver quite clearly does not like people who criticise the tar sands. Last month he attacked the world’s most renowned climate scientist, James Hansen for his opposition of the Keystone XL, saying he should be “ashamed” of himself for talking “nonsense”.

The trouble for Olivier is that there are many that believe it is not Hansen or Gore who are talking nonsense on the tar sands and Keystone XL, but the Canadians themselves.

“The tar sands are one of the most polluting and destructive sources of oil on the planet, and to prevent runaway climate change we need to leave this filthy fuel in the ground”, argues Jess Worth from the UK Tar Sands Network. “Canada should stop interfering with Europe’s climate policy-making and instead pour all this money and energy into developing a strong renewables industry.”