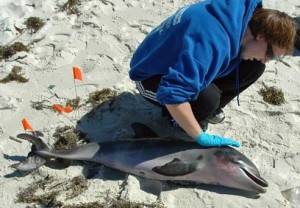 Three years ago this week, the lives of many in the Gulf of Mexico were changed forever, as BP’s Deepwater Horizon exploded killing eleven people and pouring some five million barrels of oil into the Gulf.

There were many veterans of fighting the oil industry in Alaska and especially those who battled Exxon in the aftermath of the Exxon Valdez disaster who warned against using the deadly dispersant CoreExit and said that it would take years before the full impact of the spill was known.

But as soon as that oil disappeared from view, there were cheerleaders who said that once again environmentalists had exaggerated the threat.

As the third anniversary of the disaster approaches on Saturday, we may get the results of new scientific research but already the signs are not good. Earlier this month, scientists from University of South Florida (USF) reported that the spill killed off millions of amoeba-like creatures, called the foraminifera, which form the basis of the Gulf’s aquatic food chain.

“Everywhere the plume went, the die-off went,” said David Hollander, a chemical oceanographer with USF. And of course this plume was made worse by the dispersant Corexit.

As the Tampa Bay Times reported “The full implications of the die-off are yet to be seen. The foraminifera are consumed by clams and other creatures, who then provide food for the next step in the food chain, including the types of fish found with lesions. Because of the size of the spill, the way it was handled and the lack of baseline science in the Gulf, there’s little previous research to predict long-term effects.”

Other scientists are concerned too. Louisiana State University oceanographer Jim Cowan said last week “We are seeing a high number of fish that have discoloured areas on the body … where the scales easily slough off when the fish are handled. We have continued to see low liver weights in those fish with outward signs of problems.”

Crabs are faring no better: Darryl Felder, a University of Louisiana biology professor, says: “People are bringing in (crabs) that are really messed up. The crab catches are really down, and what they’re getting have big lesions on them — lesions and fungal or bacterial infections.”

And, just as many people warned at the time, the use of Corexit has added to the problems: Yesterday the Independent newspaper reported “Hundreds of beached dolphin carcasses, shrimp with no eyes, contaminated fish, ancient corals caked in oil and some seriously unwell people are among the legacies that scientists are still uncovering in the wake of BP’s Deepwater Horizon spill.”

Over 650 dead dolphins have been found since the spill, with infant dolphins mortality six times the average rates in January and February of this year. This is four times the historical average. Sea turtles are also being stranded at unprecedented rates.

Doug Inkley, a senior scientist for the US National Wildlife Federation and the author of a report published this week on wildlife affected by the spill, told the Independent said: “These ongoing deaths – particularly in an apex predator such as the dolphin – are a strong indication that there is something amiss with the Gulf ecosystem.”

And one of the reasons for the problems is BP’s use of Corexit which caused a “a giant black snowstorm” of tiny oil globules. A study last autumn concluded that the dispersant was over 50 times more toxic than the oil itself.

One scientist, Dr William Sawyer, a toxicologist, who has studied concentrations of petroleum hydrocarbon (PHC) in edible fish and shellfish in the region, said: “The study shows that the absorption [of the oil] was enhanced by the Corexit.”

Local doctors, have, according to the Independent, also documented over 110 people made sick by the spill, and chemicals used in the clean up.

The Tampa Bay Times sums up the argument in an editorial: “The latest discovery by local scientists researching the BP oil spill is a reminder to the drill-baby-drill crowd that the nation’s energy policy cannot return to business as usual”.

It concludes: “This is no time to open more of the Gulf to the unknown danger of oil drilling. Developing renewable energies and working harder on the conservation front must be the nation’s new priority.”