Exxon’s top lobbyist, Ken Cohen, called my colleagues and me liars this weekend.

In a post entitled “Five lies they’re telling you about the Mayflower pipeline spill,” he said: “What I thought I’d talk about today are the top five inaccuracies being spread by anti-fossil fuel activists seeking to capitalize on this unfortunate event.”

That’s a pretty rich statement coming from a guy who shills for a corporation that spent millions spreading disinformation about climate science, continues to deny and contest payments to victims of the Exxon Valdez spill, has been low-balling estimates of the Arkansas oil spill, and has spent the past week intimidating and blocking out the media from reporting the truth at their spill in Arkansas.

Nevertheless, let’s have a look at what Ken Cohen has said we’re lying about.

First, he writes of a…

“bizarre charge…that ExxonMobil is relying on a law that exempts diluted bitumen from taxes that support the Oil Liability Trust Fund and thereby will avoid paying for the cleanup.”

What Cohen is referring to here is a loophole that makes tar sands oil exempt from an 8-cent-per-barrel tax that supports the Oil Spill Liability Trust Fund.  Oil Change International, along with NRDC and Earth Track, released a report last year on this loophole, entitled “Irrational Exemption”, and the Democrats of the House Natural Resources Committee also have a report out on this as well (not to mention a bill that’s been introduced to close the loophole).

So in that context, I’m not sure why it would be bizarre to suggest that ExxonMobil, or any oil company, would do whatever it can to avoid paying taxes. After all, it spends millions lobbying Congress and contributing to campaign coffers every year to do just that.

But in any event, it’s good to see that we’re all on the same page about the loophole that allows companies to avoid taxes on tar sands that would otherwise help fund the Oil Spill Liability Trust Fund. The oil industry often says they don’t receive subsidies from the government, but yet as Mr. Cohen admits, apparently they do.

One wonders, perhaps Exxon will agree that this is an unacceptable loophole and announce their support for closing it?

“Let me start by saying ExxonMobil will pay for the cleanup. Period. Full-stop.”

Desmogblog lays out the facts in stark detail, but the long and short of it is we’d be fools to take Exxon at their word on this. The history of their actions after many oil spills shows otherwise. To highlight just a few:

“The Exxon Valdez spill was in 1989, they still, 21 years later, have not paid the [full] amount awarded in court (a mere $500 million) to those affected and in fact over 8000 people have died while waiting for compensation.”

“Still pending against the company is a lawsuit from a group of riverfront property owners who are seeking tens of millions of dollars in damages over allegations that the company failed to properly clean up after the spill…Attorneys for Exxon have asked U.S. District Judge Richard Cebull in Billings to dismiss the case. A decision is pending.”

“The second inaccuracy here is that oil spilled in Mayflower is diluted bitumen from the Canadian oil sands. The crude that spilled is Wabasca heavy oil and it’s from Alberta near the area where there is oil sands production.”

Our friends at NRDC have already torn apart this name game in great detail. Check out the details in this blog post from Anthony Swift. In addition, Reuters reports that Wabasca heavy ” is a heavy bitumen crude diluted with lighter liquids to allow it to flow through pipelines, according to the Canadian Energy Pipeline Association (CEPA), which referred to Wabasca as “oil sands” in a report.”

Sorry Mr. Cohen – as the saying goes: If it looks like a duck, swims like a duck, and quacks like a duck, then it probably is a duck. Although, tragically in this case the tar sands spilling in Arkansas is tarring ducks and preventing them from swimming, quacking and in a lot of cases even really looking like ducks.

“So, as a result of the fact that the crude that spilled in Mayflower is conventionally produced heavy oil, it is considered taxable under the Oil Liability Trust Fund.”

Now, let’s allow Cohen’s assertion that Wabasca heavy oil is not tar sands – even though it is, as CrudeMonitor lays out on its website and in the screen capture below – and therefore Exxon is being taxed on it.  Frankly, we’d love to be proven wrong if this is the case. 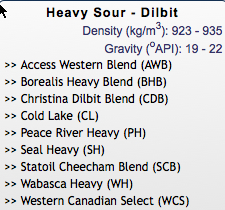 So here’s a challenge to ExxonMobil: Show us the proof that ExxonMobil is paying taxes into the Oil Spill Liability Trust Fund for all of the Wabasca heavy crude (aka tar sands) that ExxonMobil is shipping in pipelines around this country.  Prove us wrong.

Seriously, we would be happy to be proven wrong here…but I’m afraid given Exxon’s history of spreading misinformation, we’ll need to see the proof.

“So to sum up – We’re paying for the cleanup. The oil is conventionally produced heavy crude. And it’s considered taxable.”

To sum up from my end, I’d simply say:

In short: Prove us wrong, Exxon.

But while Exxon is proving us wrong would make me a temporarily happy “anti-fossil fuel activist”, the truth would remain that Exxon is spilling dangerous oil all around the country, raking in buckets of government subsidies every year, and imperiling our futures every single day.  I wish we were lying about that, but unfortunately the proof is all around us.