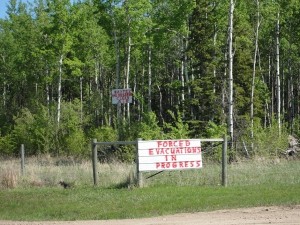 At least six families have left their homes in the last two years due to air pollution from tar sands operations in Alberta, including from heated bitumen tanks giving off noxious fumes.

The latest refugee, Thera Breau, a thirty-six year old mother of four, has just left her home due to air pollution from bitumen drilling and storage facilities in Alberta’s Peace River region, where there are over 40 wells in the area.
Over the last few years there have been hundreds of complaints from local residents, but this has not stopped theair pollution problem.

Breau told the Canadian paper, The Tyee “I see the health effects on my boys, the tremendous traffic on the roads and I can smell the bitumen.”

As The Tyee reports: “She suspected bitumen pollution when symptoms of ill health disappeared from her four boys when the family left Peace River for six weeks over the Christmas holidays.” But when the tar sands operations began again in March, her children started experiencing stomach aches, eye problems and open wounds.

Dozens of others are said to have been made sick from the bitumen fumes, with persistent health complaints from numerous local farmers, including “headaches, disorientation, blackouts leading to bad falls, night sweats, chronic nose and throat irritation, lung congestion, chronic coughing, reduced sense of smell, extreme fatigue and swollen lymph glands”, according to The Tyee.

These symptoms are consistent with industry warnings of dangers to bitumen vapours. A 2003 Shell Bitumen Handbook notes that bitumen fumes from heated storage tanks can “result in the irritation to the eyes, nose and respiratory tract and headaches and nausea.”

Other refugees are Karla and Alain Labrecque, former neighbours to the Breau family, who started experiencing health problems in December 2010. At the time they were living just half a mile from 16 bitumen storage tanks.

Both Alain and his wife started experiencing headaches. “I never had headaches in my life. I couldn’t shake them off and then my eyes began to develop a twitch,” says Alain.

His wife also started getting balance problems. “We figured out what it was. It was the smell. Whenever the smell was bad, the day after we had symptoms,” Karla told the Canadian press last year.  Her headaches stopped as soon as they moved.

But she also noticed the pollution affecting her children. “I have two young children who I initially thought were going through a clumsy stage related to either a growth spurt or simply due to their age but now I know that they were being poisoned,” Labrecque wrote. “Since making the difficult decision to leave our farm, both my children have made dramatic recoveries but I can’t help but think about what long-term effects they may suffer.”

Another resident who also moved last October is Vivianne Laliberte after being repeatedly “gassed” from emissions from the tar sands. “There are a lot of sick people but they don’t have the money to move,” Laliberte told The Tyee. “It’s a desperate situation”.

In a letter to Alberta Premier, Alison Redford, Vivianne and her husband wrote: “Every breath we take when at home is poisoning us. We believe that the air contaminants have been absorbed into the materials of our home and are retained there.”

Laliberte never received a reply from Redford. Maybe Redford was too busy promoting the tar sands in London, whilst swanning about at the Olympics.