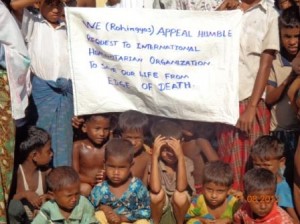 Human rights campaigners are warning that further ethnic cleansing in Burma, which is being exacerbated by land clearances due to economic developments surrounding the Shwe Oil/Gas pipeline, could be imminent.

The Shwe pipeline, which ironically means Golden in Burmese, is due to open later this year. It will allow oil from the Gulf states and Africa to be pumped to China, bypassing a slower shipping route through the Strait of Malacca. It will also ship gas from off shore western Burma’s Arakan State, to southwest China.

Last year there were two massacres against the Rohingya, an ethnic Muslim-minority population who inhabit Arakan state, including the strategic port of Sittwe, which is the start of the pipeline on the Burmese coast.  There are credible reports that the Burmese military is involved in the ethnic cleansing.

Banktrack has repeatedly called on international banks such as Barclays and Royal Bank of Scotland to stop financing the pipeline or the companies involved in it, until the protection of community rights along the route could be guaranteed, but this has not happened.

Described by the UN as being amongst the most persecuted people in the world, the Rohingya have been described as the “world’s most forgotten people“. The massacres against them occurred in June and then again in October, with over 120000 now living as displaced people in camps in the state of Arakan, and many more having left for Bangladesh and further afield.

After the first massacre in June, Human Rights Watch argued that “Burmese security forces committed killings, rape, and mass arrests against Rohingya Muslims after failing to protect both them and Arakan Buddhists”. At the time, they estimated that “many of the over 100,000 people displaced and in dire need of food, shelter, and medical care.”

Events worsened last October when another massacre took place. Again Human Rights Watch argued that “attacks and arson” in late October “against Rohingya Muslims in Burma’s Arakan State “were at times carried out with the support of state security forces and local government officials.”

Last week the London-based Islamic Human Rights Commission warned that “We are extremely concerned about the increase in propaganda against the minority Rohingya in Burma.  It suggests that there is a high possibility of a third massacre against the Muslim minority”.

The Chair of IHRC, Massoud Shadjareh said, “There is a hidden genocide taking place in Burma, and we must speak out before even more of the Rohingya are murdered.  The international community need to come together and stop a third wave of violence taking place.”

Speaking to Oil Change International this morning, leading human rights campaigner Jamila Hanan, who is based in the UK and is founder of Save the Rohingya, said: “We are anticipating a third massacre of the Rohingya on the same scale which took place in Rwanda. We have been informed that this will take place sometime between now and mid-April.”

Hanan continued: ““There is a definite link between the oil development and the elimination of the Rohingya. The Rohingya are being cleared out of Sittwe which is being developed as a deep sea port to take oil tankers from the Middle East. There is huge number of economic developments around the port of Sittwe as a result of the new pipeline.”

The strategic port of Sittwe, where many Rohingya are based, and where the pipeline starts, is just one factor. Another are lucrative oil blocks which have previously been off limits due to sanctions. Next month, Burma plans to launch a much anticipated bidding for 30 offshore oil and gas blocks April, which is likely to receive bids from oil majors such as Chevron, Total and ConocoPhillips, amongst others.

“Our politicians must put their own economic interests aside and act urgently to prevent this imminent human disaster, “says Hanan. “Never before has the public been so informed through social media that a massacre was about to happen – our governments must not be allowed to sit back and do nothing.”