Yesterday history was made.

The organisers had hoped for the largest climate rally in history, but even they were amazed at how many people turned up.

At one stage the estimate was 35,000, then 40,000 and at the end people estimated that nigh on 50,000 had poured into Washington with one message to Obama: Say no to the KXL pipeline and take decisive action on climate.

Wrapped up against the capital’s biting cold, from young and old, from students to scientists, from community leaders to ordinary citizens concerned about climate, they marched in their thousands.

They came from over 30 states in the US but also from Canada, holding thousands of hand-made banners and carrying a huge home-made pipeline. They were united in solidarity against the pipeline that would carry the dirty tar sands from Alberta to the US.

“This was the biggest climate change rally in U.S. history,” said Bill McKibben from 350.org and one of the organisers of the rally. “By our count, 50,000 people gathered by the Washington Monument and then marched past the White House, demanding that the President do more than pay lip service to what one speaker called ‘the climate crisis’.”

McKibben told the crowd, “For 25 years our government has basically ignored the climate crisis: now people in large numbers are finally demanding they get to work. We shouldn’t have to be here – science should have decided our course long ago. But it takes a movement to stand up to all that money.”

Earlier last week, Michael Brune, Executive Director of the Sierra Club was arrested outside the White House with McKibben and forty six other leaders on climate, including Steve Kretzmann from Oil Change International. This is the first time in its history that the Sierra Club has backed civil disobedience.

“This is not your father’s climate movement” said Kretzmann. “Great work by so many has put this issue into its proper context – a moral one that centers on all of our survival. The energy, passion, youth and determination behind this movement is going to fuel many, many struggles on this issue over the next decade.  We’re headed uphill, but today was the most hopeful day in years.”

Yesterday Brune spoke passionately about the need for action. “Twenty years from now on President’s Day, people will want to know what the president did in the face of rising sea levels, record droughts and furious storms brought on by climate disruption. President Obama holds in his hand a pen and the power to deliver on his promise of hope for our children.  Today, we are asking him to use that pen to to reject the Keystone XL tar sands pipeline, and ensure that this dirty, dangerous, export pipeline will never be built.” 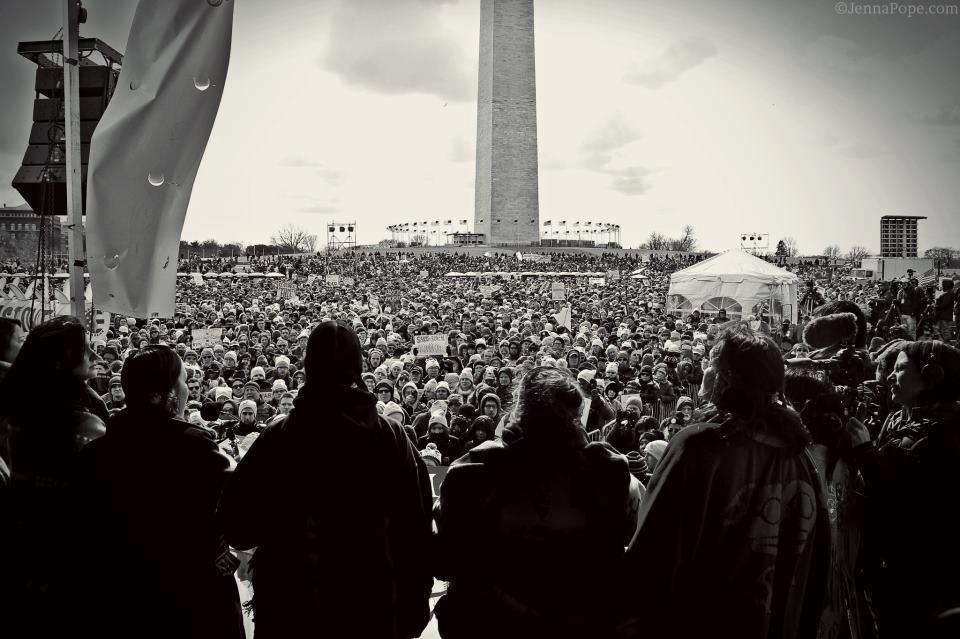 Van Jones, a trustee of the Natural Resources Defense Council and president of Rebuild the Dream, used to advise Obama on the need for green jobs, not those built on dirty fossil fuels.

“This President has the power to achieve the single biggest carbon reduction ever, by holding our biggest carbon polluters – dirty power plants – accountable for what they dump into the air,” Jones said. “Cleaning up this pollution and using more clean energy will provide jobs to thousands of Americans, save families real money when it comes to electricity bills and, most important, will make a real difference in our health and the health of our children.”

Indigenous leaders from Canada also spoke. “The Yinka Dene Alliance of British Columbia is seeing the harm from climate change to our peoples and our waters,” said Chief Jacqueline Thomas, immediate past Chief of the Saik’uz First Nation in British Columbia and co-founder Yinka Dene  Alliance. “We see the threat of taking tar sands out of the Earth and bringing it through our territories and over our rivers. The harm being done to people in the tar sands region can no longer be Canada’s dirty secret.”

Reflecting the political battle to get the pipeline banned, only one member of Congress spoke, the Democratic Senator Sheldon Whitehouse of Rhode Island. He told Reuters that Obama risked creating a “credibility gap” if he approved the pipeline.  “He would have to roll out a very complete and very strong package to offset something that on its own is described by government scientist as ‘game-over’ on climate,” he said.

Actor and environmentalist Robert Redford previously wrote about the planned rally, “This is the beginning. The beginning of a real battle, for America’s future. President Barack Obama’s legacy will rest squarely on his response, resolve, and leadership in solving the climate crisis.”

So where was the President yesterday? He wasn’t watching from the White House. He was in Palm City, Florida, playing golf with Tiger Woods, at the exclusive Floridian Golf and Yacht Club.

We all hope that doesn’t reflect his priorities.