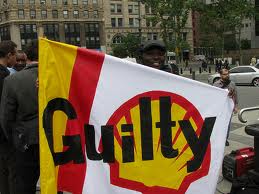 The desolate Niger Delta, where decades of gas flaring and chronic pollution have inflicted so much misery, is a world away from the clean clinical court room in the Hague.

But today, Shell’s dirty dealings in Nigeria finally came home to roost when a Dutch court ruled that the oil giant should pay for one out of five cases brought against it by Nigerian farmers and Friends of the Earth Netherlands.

The court claimed that for two oil spills near the village Ikot Ada Udo that Shell “has violated a duty of care and shall be held liable for tort of negligence”.

Friends of the Earth Netherlands, known as Milieudefensie and the plaintiffs will be disappointed that not all the claims were successful, but they plan to appeal about the spill at Goi in Ogoniland, which the court ruled there was “insufficient evidence that it was not cleaned up”.

But the fact is that a Dutch court has found Shell guilty in its home country and that will now set a huge precedent for further claims.

If I was Shell I would now be really worried. They might have edged the first legal battle on points, but they face losing the larger legal war.

Geert Ritsema, who has led the legal fight against Shell for Milieudefensie has taken to Twitter arguing this is a “major breakthrough” which will serve as a “major precedent.” “History has been written today” he argues.

Let us not forget that this is the first time a multinational has been held accountable for the actions of its subsidiaries in its home nation.

This could open the flood gates for litigation against Shell or other multinationals in other countries.

As John Vidal wrote yesterday in the Guardian, behind the current plaintiffs “stand possibly a long line of litigants and lawyers.”

It was back in 2008 that the four Nigerians and Friends of the Earth filed suit in the Hague, seeking damages from oil spills in the Niger Delta. The legal case has an historic first. Despite chronic pollution from Shell’s operations for decades, it was the first time a Dutch-registered company had been sued in the Netherlands for offences by a foreign subsidiary.

Like so many times before, Shell had tried to argue that that the oil leaks were caused by sabotage and it was not responsible. They also argued that it had cleaned up the spills to an adequate standard.

The court may have ruled that sabotage was to blame for some of the spills, but Ritsema argues he is “very pleased” that the court has ruled that Shell also has a duty to prevent sabotage of its pipelines.” This fact could also open the legal floodgates too.

Once again Shell’s arguments have been found wanting. But then nobody believes Shell’s promises in the Delta anymore after decades of pollution and violence. As John Vidal wrote yesterday: “I talked to people on the delta this week ahead of the Dutch verdict. They told me that nothing has changed in the past few years, even that the pollution was getting worse.”

But, because of this judgement, the old ways of working for Shell, of routine and chronic pollution and disregard for the communities it works in, will have gone.

Nnimmo Bassey from Environmental Rights Action / The Nigerian arm of Friends of the Earth argues that “having Shell in the dock at The Hague sends a number of signals. For one, the days of ‘business as usual’ for multinational corporations may be drawing to a close”. He calls today’s judgement a “watershed”.

Indeed after today, the days of business as usual are gone. The days of hope have begun. As Geert says “History has been written today”.