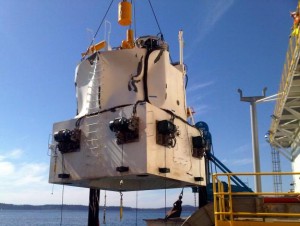 Sometimes a story comes along that would be quite funny if it weren’t so deadly serious.

Anyone who reads this blog will know that, despite huge opposition, Shell has been gearing up to drill in the Arctic for years.

It has spent billions of dollars on leases, on public relations and supposedly getting ready. It is, says the company, “Arctic Ready”.

In short, Shell has promised the most sophisticated spill response plan ever by an oil company.

So forget the Exxon Valdez, forget Deepwater Horizon, Shell had promised there would be no oil spills on its watch in the Arctic and, if there were, then the company would be ready.

As part of its preparations, Shell has been testing equipment designed for the Arctic in Puget Sound, near Seattle, including an oil spill containment dome that would be lowered from its spill response barge called the Arctic Challenger.

Then in September, it was revealed that drilling had been delayed because there were problems with the Challenger and its containment dome.

The first thing to remember is that the Arctic Challenger and its equipment passed several US Coast Guard tests for seaworthiness in September.

The second thing is that Shell was testing the Challenger’s dome in the relatively benign conditions of Puget Sound, not in the cold harsh Arctic.

The third thing is that the test was meant to take a day, in fact it took at least five days. If this had been a real response to a spill, this time delay could have had a huge ramifications for the impact of the spill on wildlife and the environment.

Emails to and from Shell to the federal Bureau of Safety and Environmental Enforcement reveal the extent of the fiasco, as KUOW point out:

On Day 1, the Arctic Challenger’s dome comes unhooked from some of the winches used to manoeuvre it underwater. The crew repairs it.

Day two is not much better when a small remote-controlled submarine, called an ROV, gets tangled in some anchor lines. It took divers about 24 hours to rescue the tiny ROV.

The emails note that the company now wanted to stop using the submarine. “Shell has asked to continue tests using divers. Asked if they would use divers in real situation. Safety would not allow them to use divers.”

Things go from bad to worse on day five when the test had its worse accident.  On a still calm night, Mark Fesmire, the head of BSEE’s Alaska office, is on board the Challenger.

He writes: “Watching operations after we got the support bouy disconnected when the ROV screen filled with bubbles. The dome suddenly lifted to the surface and breached like a whale. Massive venting and dome then sunk to the end of a safety bouy about 20 feet off bottom.”

He adds: “Don’t know cause or next steps. Will try to get some sleep while they figure it out. Will call when I know more.”

Some twelve hours later, the Challenger’s dome is brought back to the surface. Mark Fesmire writes:  “As bad as I thought. Basically the top half is crushed like a beer can.”

It is worth repeating that line: Shell’s world class cutting edge technology, “crushed like a beer can”.

Two days later, Morgan Gray, the Senior Policy Advisor for the Natural Resources Committee asks for “additional information on what exactly went wrong, whether we know why it went wrong, and whether we think this problem is specific only to Shell’s technology or whether we have reason to believe that other similar devices might also be at risk of such an event.”

I tell you what Morgan, this exercise shows that both Shell and the oil industry are not Arctic Ready. These were in calm, relatively warm waters not the harsh cold wild conditions of the Arctic.

These documents prove again that the industry’s promise that it can drill safely and responsibly in the Arctic is a lie.

All the Obama Administration can do, once and for all, is say no to drilling in the Arctic.