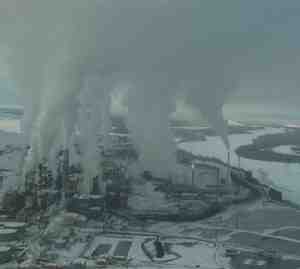 Further evidence is emerging of the lethal toxic legacy of the tar sands (forgetting for a moment the CO2).

There are two different scientific surveys that will be presented this week which cause real cause for concern.

Firstly, Canadian federal scientists have found new evidence that contaminants from the tar sands are accumulating at the bottom of lakes up to 100 kilometres away. This is much further than previously thought.

“The footprint of the deposition is potentially larger than we might have anticipated,” says Derek Muir, a senior Environment Canada scientist, and a world authority on toxic pollutants, who will present his findings later today at the annual meeting of the North American Society of Environmental Toxicology and Chemistry.

Muir argues that the rising levels of PAHs in the sediments “seem to parallel the development of the oil sands industry.”  He adds: “It is quite distinct in all the lakes”.

Other scientists are alarmed by these findings. “Those Environment Canada studies, I think, confirm my worst suspicions,” argues David Schindler, an aquatic scientist at the University of Alberta.

He adds:  “That means the footprint is four times bigger than we found”. Schindler made headlines in 2010, when he reported that pollutants from the tar sands were spreading contamination 50 kilometres away.

This is not the only devastating research to be presented this week. A team led by federal scientist Jane Kirk, also of Environment Canada, will report that snow within 50 kilometres of tar sands operations is contaminated with numerous “priority pollutants” including a neurotoxin that “bioaccumulates” in food webs.

Kirk’s colleague Joanne Parrott will also report that melt water from snow collected near the tar sands is toxic to newly hatched minnows in the lab.

Parrott has been exposing fathead minnows, which she describes as the “lab rat of the fish world”, to melt water from snow collected three to four kilometres from the tar sands, along the Athabasca River.

“The larval fish didn’t do very well in that snow at all,” says Parrott, who will report at the conference that melt water was “toxic to larval fathead minnows at 25 to 100 per cent.”

The scientists argue that this may explain why fish numbers along the Muskeg River, a tributary of the Athabasca, have plummeted in recent decades.

These two pieces of research are two more reasons to say no to the tar sands.