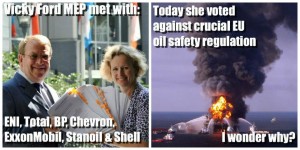 In the dark days after the Deepwater Horizon, the EU did what any responsible regulatory authority would do and promised to tighten offshore drilling rules.

The European Commission promised “a regulatory clampdown on the offshore oil industry”.

Yesterday, the all-power Industry committee at the Parliament made sure that this does not in fact happen. The committee – called ITRE for short – was deciding on a text of the proposed regulation on offshore safety which will go to a plenary vote in December.

But the oil watchdog in London, Platform has found that a group of British MEPs, led by Conservative Vicky Ford have been secretly trying to “dismantle” the regulation, claiming that it is inconsistent with existing UK rules.

Sometimes you have to give credit where credit is due and we should applaud the fact that the Conservatives in Europe now publish the meetings their MEPs have with outside lobbyists. A quick flick of the of the Conservatives’ latest lobbying contacts register  shows that Ford has near monthly meetings with oil company lobbyists between January – June 2012.

Sometimes these meeting were organised by the Oil and Gas Producers Association (OGP), who took along BP, Chevron, ENI, ExxonMobil, Shell and Statoil, amongst others. At other times they were organised by one of the world’s largest PR firms Hill & Knowlton.

In total, Ford tabled over 360 parliamentary amendments, arguing that, after consulting the oil industry and others, the EU legislation needed “massive re-writing”.

“The unrealistic timescale and interpretative guidance proposed by the Commission would force the UK oil and gas industry to divert resources to these changes, causing serious project delays with consequences for the economy, investment, jobs and security of energy supply,” she says.

In return, Platform argues that Ford has weakened the proposed legislation: “The most important amendment is to change the status of the document from a binding ‘regulation’ to a ‘directive’, which states may interpret as they see fit. Ms Ford also proposes to change the definition of ‘acceptable’ risk of major accidents to a weaker ‘tolerable’ level of risk”, argues Anna Galkina, a researcher from Platform.

Galkina goes on to argue that “It appears that instead of using the opportunity of the proposed regulation to truly strengthen offshore safety provisions in the UK and outside of it, the UK government and MEPs have simply done everything to ensure that the oil industry as well as the UK regime had to change as little as possible.”

Legislators being puppets for the oil industry… Déjà vu, anyone?