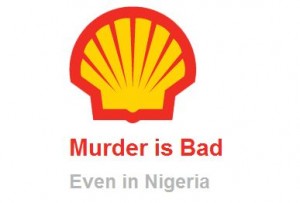 On Monday morning the newly formed “Grassroots Employee Empowerment Division” from Shell emailed 71,900 Shell employees asking them to access a website –murderisbad.com – which has information on the historic Kiobel legal case against the company.

They asked the employees to make their feelings known on Twitter and other media.

In retaliation, Shell blocked its employees from accessing the site. And no wonder. For the Grassroots Employee Empowerment Division does not exist. It is the Yes Men under the auspices of an activist group called People Against Legalizing Murder  or PALM  for short.

Moreover, Shell does not want its employees to know the truth.  As any regular reader of this blog with know, its history in Nigeria is disgraceful: it is one of complicity in murder, and other grotesque human rights abuses, rampant pollution and double standards.

Shell does not want its employees to know that once again the oil giant is trying to avoid its day in court. In 2009, the oil giant settled the ground-breaking Shell versus Wiwa case for $15.5 million on the eve of the trial. It did not want the public to know the true extent of its complicity with a murderous Nigerian government in the death of Ken Saro-Wiwa and others.

But there were always two legal cases against Shell. The other one, Kiobel v. Royal Dutch Shell, was the second attempt to hold Shell responsible for collaborating with the Nigerian military regime in a spate of extrajudicial killing, torture, and other crimes against humanity that left thousands dead, and countless others homeless and traumatised.

The latest stage of the Kiobel case was held on Monday in America’s Supreme Court. Shell’s lawyers are trying to overturn a 200-year old Alien Tort Statute (ATS), that compensates victims of international crimes.

Even the NYT said yesterday in an opinion piece that Shell should be answerable for its crimes: “American law has allowed plaintiffs to sue corporations for more than 200 years. There is no good reason that principle should not be applied to corporate actors for claims under the Alien Tort Statute, when evidence points to severe human rights violations.”

Sean Dagohoy from PALM on the murderisbad website adds that: “When it comes to things like election spending, Shell and other corporations want to have all the rights of people. But when accused of murder, Shell conveniently argues that they aren’t a person. A ruling in their favor would be a very dangerous precedent, and would badly undermine the United States’ reputation as a place that cares about human rights. That’s why we attempted to reach out to Shell employees to help get the word out.”

Meanwhile there is further trouble for Shell.

The Athabasca Chipewyan First Nations (ACFN) have filed a legal challenge against Shell Oil Canada’s application to expand the Jackpine Mine oilsands project in Alberta, arguing that under current conditions the project will violate aboriginal rights and freedoms.

“We have told Shell and the government that the consultation process is not adequate at all, that there needs to be more time and work to fully address treaty rights,” said Eriel Deranger, a spokesperson for the ACFN.

Shell trampling over the rights of the locals  – its just history repeating itself.