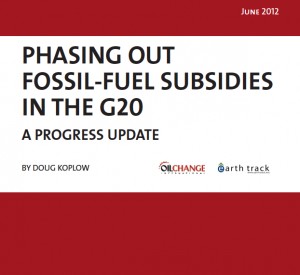 In this, our second review of progress in meeting this phase out commitment (an earlier review was published in November 2010), we reviewed formal submittals by member countries to the G20 and the WTO, reached out individually to staff from each member country, and reviewed third-party assessments of fossil fuel subsidies.

We conclude that the G20 effort is currently failing.  The following factors are the key reasons for this failure.

G-20 nations are changing their definitions, not their subsidy policies. The vague definition fossil fuel subsidies in the G20 commitment has allowed many countries to “opt-out” even of reporting on their fossil fuel supports. The general language in the original commitment, combined with strategic interpretation of that language, has resulted in wide divergence in what different countries count as being a “subsidy,” an “inefficient subsidy,” and a subsidy that is both “inefficient” and “encourage[s] wasteful consumption.” The absence of an oversight mechanism for reporting under the G20 agreement or any penalty for inaccurate or incomplete data has led most member countries to minimize their reporting on fossil fuel subsidies. Non-reporting is growing. The number of countries opting out of reporting entirely tripled from two in 2010 to six in 2011. It is expected to increase further in the 2012 reporting cycle.

Self-reporting of subsidies is failing. Transparency on support policies to fossil fuels is a pre-requisite for any further analysis or reform. Whether or not an individual country considers a particular support as subject to phase out under the wording of the G20 commitment, those policies need to be visible to others so that the assumptions of the national governments can be seen and potentially challenged. Mirroring the gaps and delays found in subsidy reporting to the WTO, the scope and quality of public reporting by members on fossil fuel subsidies to the G20 is well below any reasonable minimum needed for real reforms to take hold.

No subsidies have actually been eliminated as a result of the G-20 commitment. The failure of the G20 reliance on self-reporting can be seen not only through the growing numbers of member states providing no information at all, but also by the very small number of subsidies reported by the other members and by the lack of growth in identified policy interventions since the first progress report submitted by members in June of 2010. As with our last review, we were again unable to identify a single fossil fuel subsidy reform that was driven by the G20 phase out commitment.

Subsidy estimates from third-parties continue to be much larger than those reported to the G20 by member governments. A final indication of the failure of self-reporting is the continued divergence between self-reported subsidy figures to the G20, and the much larger values reported by third parties. Strong research mandates within the IEA, OECD, World Bank, IMF, and UN over the past couple of years have allowed these institutions, as well as non-governmental organizations, to expand the number of countries and the types of supports on which data on fossil fuel subsidies has been collected. This data, while certainly not complete, nonetheless provides a critical leverage point for global action on fossil fuel reforms. It is instructive to note that all six countries opting out of subsidy reporting to the G20 in the 2011 reporting cycle, do have subsidies based on this third party research, and that those subsidies are large — generally billions of USD per year.

The growth of independent data on fossil fuel subsidies is an important support for the G20 phase out initiative, and should continue. However, it cannot be the full solution, as these outside organizations generally have more limited access to information on important subsidy types and their fiscal cost than do the governments themselves. Thus, government buy-in and active participation in the G20 subsidy phase out process remains on the critical path for successful reform.

Structural reforms suggested in our 2010 report continue to be needed to increase the likelihood of the phase out being successful. These include:

• Separating subsidy reporting from reform, in order to build transparency while bypassing potential conflicts on the scope and timing of subsidy elimination.

• Establishing an oversight and review board for reporting to review submittals for accuracy and coverage, with the ability to go back to the member state to fill in gaps.

• Standardizing the submittal process for subsidy information as well as requiring standardized reporting on the claimed justifications for keeping particular subsidies outside the purview of the G20 phase out.

• Initiating discussion and research on an appropriate secretariat to oversee reform efforts.

In sum, it is clear that more of the same will not lead to success. Rather, self-reporting must be replaced by a new institution or institutional role that facilitates the collection, analysis, and fully transparent publication of fossil fuel subsidy data when the countries themselves fail to deliver.  This is the single most important step needed if fossil fuel subsidy reform is to succeed.