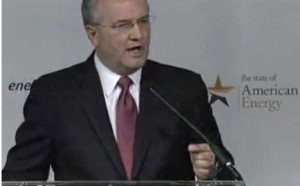 American Petroleum Institute President Jack Gerard today announced the oil and gas industry’s latest election-year scare campaign to threaten the demise of the U.S. economy unless Big Oil gets its every wish in Washington. This year the wish list includes approval of the Keystone XL pipeline, expanded offshore drilling on both coasts, opening up the Arctic National Wildlife Refuge and more federal lands in the West to drilling, and smaller buffer zones between drilling operations and drinking water supplies.

What if Washington doesn’t comply by delivering Keystone XL and the rest of the wish list? Gerard, the oil industry’s chief bully, threatens “huge political consequences” for Barack Obama.

You can almost set your watch to this industry’s tired plays on this front. If it’s January of a presidential election year, it must be time for the oil industry to threaten Washington politicians to ensure they continue to do the industry’s bidding. The threats are delivered in the form of outlandishly expensive advertising campaigns and punditry tours, aided by a captive media that serves its role as stenographer for the industry’s inflated jobs figures and misleading claims.

The API campaign is nothing more than a fresh skin on a very old and stale argument – that President ______ (insert current name) needs to continue opening up more of the nation’s lands, particularly public lands, for oil and gas drilling, OR ELSE ______(insert latest political talking point), in this case “jobs jobs jobs” will be lost (a bogus argument).

CNN notes the close correlation between API’s target states and some of the hottest states in the 2012 U.S. elections – hint: they’re the same.

Gerard said it is not intended to be an advertisement or promote one party or candidate over the another, but rather a “conversation” to “help Americans understand what’s at stake.”
While the campaign will run nationwide, it will focus heavily on states where Gerard said energy is an important issue — including Ohio, Pennsylvania and Virginia. Those states also happen to be important battle ground states in the upcoming election.

“Clearly, the Keystone XL pipeline is in the national interest. A determination to decide anything less than that I believe will have huge political consequences.”

Like what Mr. Gerard? Your industry isn’t going to lend as much financial support to Democrats this year as it will to Republicans? Surprise, surprise…surprise.

The oil-soaked GOP is doing cartwheels over their supposed ‘victory’ in forcing Obama to decide on Keystone XL within 60 days, although many environmentalists predict the bullying to backfire. But House Republicans won’t let reality stand in the way of a good circus stunt.

House Republicans are putting more pressure on President Obama to make a decision on the Keystone XL pipeline, unveiling a [countdown] clock that counts the number of days since the president signed legislation requiring a speedy verdict on the project.

How about putting that clock next to a ticker showing the oil industry money flowing into Congressional campaign coffers? That would be a sight!

Also during his statement today, Jack Gerard asked rhetorically, “Why would we import a product we can produce at home?”

But Jack, why not answer the real question: If Big Oil is sincerely interested in domestic energy security and low-cost gasoline for Americans, why would your industry be clamoring feverishly to maximize U.S. oil and gas export infrastructure that would send our ‘homegrown’ oil and gas overseas to Asian and European markets – raising American gas prices yet higher?

Greenpeace launched its own Vote 4 Energy site mocking the API’s claims that its ads feature “ordinary Americans” and releasing a hilarious spoof video.

“When’s the last time someone got hired to clean up a solar spill?” asks an actor playing an ordinary American in the Greenpeace spoof. “Oh no, I’ve got sunlight all over me.”

Greenpeace said in a statement:

“The Vote 4 Energy campaign is the latest effort by the oil industry to fake citizen support for its agenda. The American Petroleum Institute has repeatedly spent millions to block clean energy solutions and fake grassroots support for Big Oil.”

While API says its new ads are designed to feature only “ordinary Americans” expressing their thoughts on energy, in reality the industry’s ad agency carefully handpicks people to read from a script. In other words, it is pure astroturfing.

Recall that API ad producers kicked out several people who wouldn’t agree to read the script provided by API, and instead insisted on expressing their own beliefs, as they had been led to believe they could by the API ad team’s outreach ad, which stated:

… “the ONLY qualifications” listed on the e-mail: “You are willing to go on camera and state your beliefs.”
Another is: “You are comfortable portraying YOURSELF! They want REAL PEOPLE not Actors!”

API won’t reveal how much money it is spending on the astroturf ad campaigns that will continue throughout this election year.  But it will likely rival or surpass what API spent on its 2010 election year ads – roughly $40 million.

That’s a lot of job-creating money! Too bad it’s going into bullying ads instead of supporting “ordinary Americans” who need work.