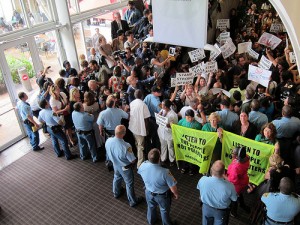 The good news is that against all the odds, the Durban climate conference produced a deal. To some the deal is seen as historic, but to many it is once again far too little.

But first let’s look at the good news.

Many delegates were really pleased after their marathon negotiating session that they had a deal at all, rather than a total collapse of the climate negotiations.

“This is an historic moment,” said Marcin Korolec, the Polish environment minister, who helped lead the European Union team which pushed the deal.

Others were equally enthusiastic. “I salute the countries who made this agreement. They have all laid aside some cherished objectives of their own to meet a common purpose – a long-term solution to climate change,” added Christiana Figueres, the United Nations climate chief.

What they have achieved is that the world is on track for a comprehensive global treaty on climate change. For the first time ever, crucially all the big emitters – China, the US and India – have signed up to an agreement, which had “legal force” to curb their greenhouse gases.

We should not underestimate how important that is: “You could hear the shifting of tectonic plates,” said one diplomat. “This is hugely important not just for the climate talks but in geopolitical terms.”

Some just saw good news out of it. Brazil’s chief negotiator, ambassador Luiz Alberto Figueiredo, said: “This is a landmark achievement that creates real possibilities for scaling up the fight against climate change. It’s an excellent text that clearly sets points of action, points of commitment, and timetables, and it is legally-binding, so it is extremely effective, potentially, for responding to the need of climate change. We got what we came to Durban to get.”

But that’s kind of where the good news comes to an end. As ever the devil is in the detail. There are now four years to agree the legal terms of the new deal, which has to be agreed by 2015, and come into force by 2020.  This date is seen as too late by many.

Moreover, there now will be years of arguments and wranglings. Even one of the key architects of the deal, EU climate commissioner Connie Hedegaard argued that “This is a process and process is filled with compromises,” conceding that critical details of have yet to be thrashed out.

And whilst the arguments continue the need for action gets ever stronger.

No wonder the reaction from environmental groups, scientists and developing nations was mixed.

Karl Hood, foreign minister of Grenada, chair of an alliance of small island states had said that his first instinct was to reject the proposed deal: “It doesn’t become operational until after 2020 so we are looking at God knows when ..my first instinct is to reject it out of and … is this a COP [conference of the parties] or is this a corpse?”

He added that “It is going to be a fight [at future conferences] because going forward you have to interpret ‘agreed outcome with legal force’ – what does that actually mean?”

Indeed, it is precisely the ambiguity of the deal and meaning of “legal force” that allowed China and the US to sign up.

And then there is what the science is telling us. Bill Hare, director at Climate Action Tracker, welcomed the prospect of a legally binding agreement, but argued that “”What remains to be done is to take more ambitious actions to reduce emissions, and until this is done we are still headed to over 3C warming. There are still no new pledges on the table and the process agreed in Durban towards raising the ambition and increasing emission reductions is uncertain in its outcome.”

Other environmental and development groups were more scathing:

Keith Allott, head of climate change at WWF-UK, added: “Governments have salvaged a path forward for negotiations, but we must be under no illusion — the outcome of Durban leaves us with the prospect of being legally bound to a world of 4C warming. This would be catastrophic for people and the natural world.”

Tonya Rawe of the charity Care USA said: “They failed the planet and especially the world’s poorest and most vulnerable people, who are already suffering from the devastating impacts of climate change. “It is inexcusable that parties have shown such a lack of urgency.”

Head of Greenpeace International Kumi Naidoo “This could take us over the 2º threshold where we pass from danger to potential catastrophe. Our atmosphere has been loaded with a carbon debt and the bill, carrying a Durban postmark, has been posted to the world’s poorest countries, especially here in Africa.”

Celine Charveriat, Director of Campaigns and Advocacy for Oxfam, said the world is “sleepwalking towards 4C”, where millions of people will be displaced by floods and drought.  “The failure to seal an ambitious deal will have painful consequences for poor people around the world,” she said. “A 4C temperature rise could be one of utter devastation for poor farmers who will face increasing hunger and poverty.”

Finally Nnimmo Bassey, chair of Friends of the Earth International said: “Delaying real action until 2020 is a crime of global proportions. An increase in global temperatures of 4ºC, permitted under this plan, is a death sentence for Africa, small island states, and the poor and vulnerable worldwide. This summit has amplified climate apartheid, whereby the richest 1 per cent of the world have decided that it is acceptable to sacrifice the 99 percent.”