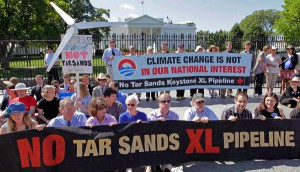 As the decision day for the Keystone XL pipeline draws ever nearer, the amount of rubbish being written by its proponents grows ever greater.

Yesterday an article in the Vancouver Sun basically said the argument was very simple: it was jobs versus ideology.

The article stated: “will human employment and corporate revenue eventually prevail over ideology and the environment?”

It went on to predict that “Putting food on the table usually wins out.”

The article added that celebrities such as Daryl Hannah, or Nobel peace prize winners such as Desmond Tutu and the Dalai Lama may have publicly supported the pipeline, but the silent voices of the unemployed were “conspicuous by their absence”.

The article misses the point on so many levels. The debate on Keystone XL was never a job about ideology over jobs. It was a debate about what kind of future we want that gives us sustainable jobs. And, more importantly, a sustainable future too.

Activist and author, Bill McKibben, who has been leading the anti-Keystone XL fight, has called the pipeline “a fuse to the second-largest pool of carbon on the planet,” behind Saudi Arabia.

And if you light that fuse the climate will be in trouble. Many leading climate experts believe that if the tar sands are exploited to the full, then this will seriously exacerbate climate change, not to mention that the pipeline itself threatens key natural habitats and drinking water.

Yes, we need jobs, but we can also have jobs that provide clean energy and not dirty oil. America could lead the clean energy revolution not help Canada become one of the dirtiest oil producers on the planet, if not the dirtiest.

Maybe that is a point that has to be repeated time and time again over the next two weeks when the State Department conducts nine public hearings throughout Texas, the Plains states and Washington, D.C., on the proposed Keystone XL pipeline.

It is said that input from the public hearings help determine whether the pipeline will get the goahead.

Many people believe that Obama will buckle to industry pressure and give in to industry demands, just like he did recently on ozone standards.

The EPA is not actually required to review ozone standards until 2013, but proposed new regulations in 2010 strengthening standards set by the Bush administration in 2008.

But the Republicans  and oil industry mounted a campaign against the proposal. Earlier this month the Obama administration, bowing to intense political pressure, withdrew the proposal, which the American Petroleum Institute said would have “eliminated millions of jobs.”

So once again the reason that Obama buckled was over jobs.

However, once again the API has plucked silly numbers out of the air. An article in Platts yesterday argued that: the “API has not tried to do studies on the actual job impacts of ozone standards or other regulations, ‘nor are we aware of others who might have,’ said spokesman Bill Bush.”

So there you go. They made the figure up.

When you read the figures on how many thousands of jobs will be created by Keystone XL – tread carefully.  Are they temporary, permanent or even imaginary? And then ask yourself have many more jobs could be created if the money was invested in sustainable clean energy?

As one commentator said in the Nation recently: “A robust green jobs program would create more jobs than the Keystone XL pipeline with the added benefit of helping to prevent a climate catastrophe.”