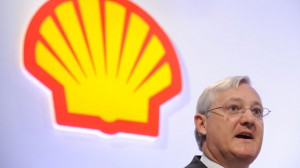 Sometimes the best protests are the most simple and symbolic.

Yesterday, Shell’s shareholders and senior management at the company’s AGM in the Hague were presented with an “erratum” to the company’s recent Annual Report.

The spoof report by Friends of the Earth looks like a real Shell report, until you start to read it. For the oil giant has never ever been this brutally honest before.

The company “admits” that it is “causing a lot of unwanted and unnecessary damage” in its global oil-gas- and biofuels operations.”

If only that were true.

“We used to operate without considering the impacts on the environment and the people affected by our business. This was the past” says the report. “Now and in the future, we will focus on finding ways to produce clean energy, to lower emissions and to help customers to do the same with theirs. In building a better energy future we all have a part to play. Shell will be doing its part in a sustainable way, and we will take full responsibility for mistakes we made in the past.”

If only it were all true as well.

The case studies include many issues readers of this blog will be familiar with: Shell’s disgraceful operations in Nigeria; its disastrous involvement in the Canadian tar sands and its dangerous operations off the Russian island of Sakhalin, which threaten the endangered Western gray whale.

There are also less known case studies about abuses, such as those resulting from Shell’s joint venture with Brazilian biofuel producer Cosan S.A., which has been linked to slave labour and violations of labour rights. Or the chronic polluted legacy from its toxic old refinery at Curaçao, off the Venezuelan coast.

The “erratum” report was presented to bemused shareholders and board members yesterday, as representatives  from different communities affected by  Shell’s wrongdoing were also present to make their point to the oil giant:

Eric Dooh, a Nigerian farmer who is taking Shell to court in The Netherlands for refusal to clean up oil spills in his fishponds and  on his fields said: “Oil spills from Shell pipelines caused the water  and agricultural land in our village to be severely polluted. We want Shell to clean up the pollution so we can fish and farm again”.

Lionel Lepine, representing the Athabasca Chipewyan First Nation in Canada said: “Shell’s tar sand operations are disrupting our traditional way of life. They are destroying our air, water, land and medicinal plants and the birds, fish and animals we depend on to sustain our people”

Mr. Lepine also stated that “Shell’s footprint in our lands will have a multi-generational effect on our children not yet born, they are violating our Indigenous rights, the rights of our sacred Mother Earth and we are here at their AGM to put them on notice that we will stop them.”

Paul de Clerck, coordinator of the corporates campaign at Friends of the Earth International, said of the novel report: “We expect that the promises in the erratum we wrote for Shell will become reality. Shell is aware of the damage it  is causing to the environment and of the violation of rights of local  communities that it is involved in. We want the company to take measures to restore this damage and to prevent further wrongdoing”.

If only this would really become true.