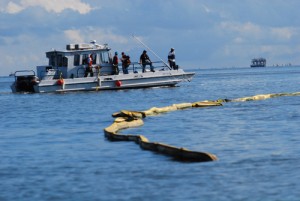 Shares in BP are falling this morning – 3 per cent in early trading so far – on the news that it could face penalties of $21 billion-plus if found fully liable for damages in a US federal lawsuit regarding the Deepwater Horizon drilling disaster.

But BP is not alone.

The US Department of Justice announced that it was not just suing BP, but Anadarko and Mitsui, its partners in the doomed Macondo well; Transocean, the owner of Deepwater rig; and the QBE syndicate 1036 at Lloyd’s of London, which insured the rig.

Interestingly Halliburton, which has been under huge criticism for its failed cement job on the rig – was not named in the lawsuit.

Announcing the legal action Attorney General Eric Holder said:  “I have seen the devastation that this oil spill caused throughout the region – to individuals and families; to communities and businesses; to coastlines, wetlands, and wildlife.”

Holder went on to say “We intend to prove that these violations caused or contributed to this massive oil spill, and that the defendants are therefore responsible – under the Oil Pollution Act – for government removal costs, economic losses, and environmental damages.”

He continued: “We are also seeking civil penalties under the Clean Water Act, which prohibits the unauthorized discharge of oil into the nation’s waters.   We allege that the defendants named in this lawsuit were in violation of the Act throughout the months that oil was gushing into the Gulf of Mexico.   And we intend to hold them fully accountable for their violations of the law.”

Although the action does not specify damages the potential penalties, under just one of the laws cited by Holder – the Clean Water Act – could reach $21bn, based on the number of barrels of oil spilt.

That’s not even counting the costs from the Oil Pollution Act.

The only reassurance for BP and its partners is that the final damages figures will depend on the US government’s ability to prove gross negligence.

But that said, experts argue the legal standard to prove liability under the Clean Water Act and the Oil Pollution Act is actually low.

“You just have to show that an event occurred and that a particular entity or person is responsible,” argues William Carter, a former federal environmental prosecutor. “Anything short of an act of God – a lightning bolt hitting something – and that person is going to be responsible for the cleanup.”

The bean-counters and lawyers from Anadarko must also be sweating this morning, because, as I pointed out on yesterday’s blog, BP’s junior partner in the well has not set aside any monies for the spill.

That is not to say that BP’s bean-counters will be especially happy either. The Federal damages will be on top of the $20bn BP has already agreed to pay into a fund to compensate people on the Gulf coast who have suffered financially because of the spill.

And as I pointed out on the blog earlier in the year, many analysts felt that BP could swallow a $20 billion hit, but $40 billion could still sink the company.  And the figure could be even higher than that.

Roger Marzulla, an environmental lawyer who headed the Justice Department’s environment division in the Reagan administration, tells the Washington Post that “Tens of billions of dollars is certainly a legitimate prospect here.”

Furthermore, this is not likely to be the end of the matter.

Justice officials have said that the filing is only “a first step” and that aggressive civil and criminal probes into the disaster are continuing.

And now it also been revelaed by Wikileaks that there are striking resemblances between the Deepwater disaster and a little-reported giant gas leak in Azerbaijan some 18 months beforehand.

BP suffered a blowout in September 2008, as well as the gas leak that the firm acknowledged at the time.

“Due to the blowout of a gas-injection well there was ‘a lot of mud’ on the platform, which BP would analyze to help find the cause of the blowout and gas leak,” the cable said.

Written a few weeks after the incident, the cable said Bill Schrader, BP’s then head of Azerbaijan, admitted it was possible the company “would never know” the cause although it “is continuing to methodically investigate possible theories”.

According to another cable, in January 2009 BP thought that a “bad cement job” was to blame for the gas leak.

Where have we heard that excuse before?