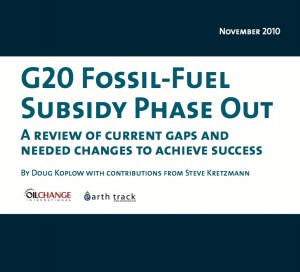 As G20 leaders prepare to meet later this week in South Korea, they face a daunting in-tray.

But amongst the issues they need to address are fossil fuel subsidies. In part they have created a rod for their own back.

It was a just over a year ago in September 2009 at the G20 meeting in Pittsburgh that they committed to phase out fossil fuel subsidies.

It was a bold promise. The G20 leaders pledged to “rationalize and phase out over the medium term inefficient fossil fuel subsidies that encourage wasteful consumption.”

If this promise was implemented it would reduce climate change and facilitate the transition to a clean energy future.Indeed modelling by the International Energy Agency and Organisation for Economic Cooperation and Development,  has estimated that phasing out fossil-fuel consumption subsidies alone (rather than production subsidies) would reduce greenhouse gas emissions 10 percent globally by 2050 relative to a business-as-usual scenario. And that is even using incomplete data.

But this is not happening.  A new report published by Oil Change International and subsidy experts, Earth Track, is the first independent evaluation of the success of the G20 Pledge to phase out the subsidies.

The report finds that, despite the promises, no new actions have been taken by G20 nations as a result of their commitment in Pittsburgh to phase out fossil fuel subsidies.

But even worse some governments’ used the old political trick of actually crediting themselves for actions they were already planning.

“No country has initiated a subsidy reform specifically in response to the G20,” the report concludes.

It continued: “Although half of the member countries reported at least one policy supporting fossil fuels that they have targeted for reduction or elimination, all actions appear to be programmes or changes that were already in process prior to the G20 communiqué and rely on previously established timelines.”

To take just one example: Canada, promised to phase out implicit tax preferences for extractors of oil from the dirty tar sands. But the country has neither accelerated nor added to the proposal since the pledge was made.

More worrying perhaps is that there is still a huge disagreement as to what a subsidy actually entails. Eight out of the 20 countries claim to have no fossil-fuel subsidies at all. However, this does not fit with the implicit support given to state-owned or state-controlled energy companies.

The report concludes: “Comparisons with third party studies of consumer and producer subsidies found that some of the countries reporting very little in the way of subsidies to the G20 had tens of billions in subsidies in the other assessments.”

“The G20 is neither revealing nor removing fossil fuel subsidies,” Steve Kretzmann of Oil Change International said yesterday. “Each G20 country has defined ‘inefficient fossil fuel subsidy’ as they like, reported on what they want, and then listed either no subsidies, or things that they had already said they were doing.”